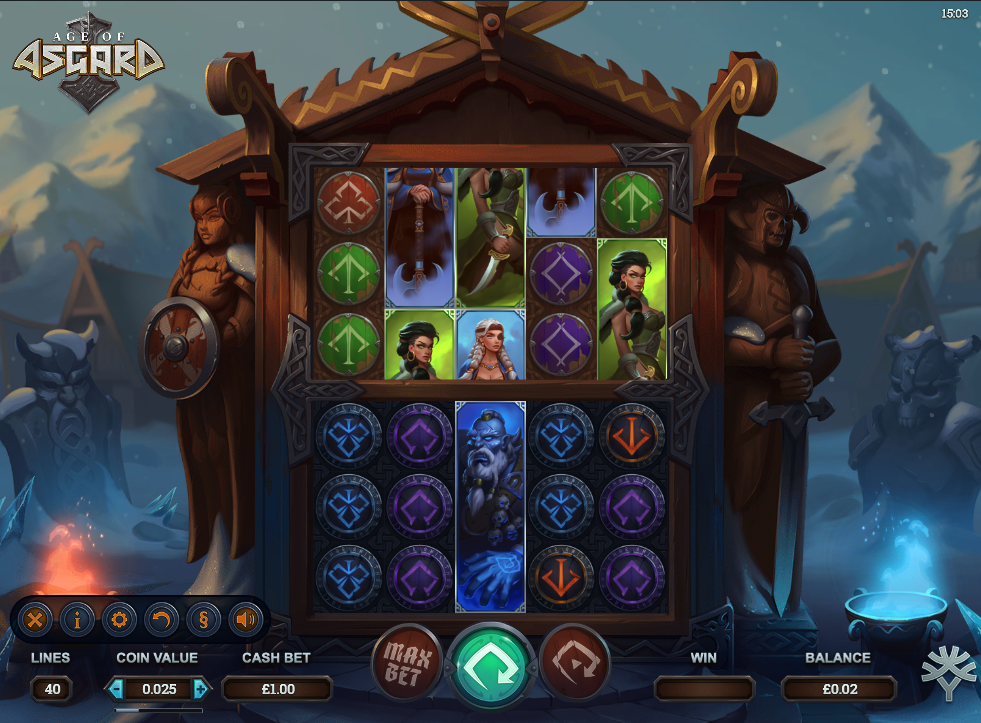 A return to the chilly landscapes and deity worship of Scandinavia awaits those online slots fans willing to try out this release from Yggdrasil Gaming – it’s called Age of Asgard and it includes a clever, double reel gameplay mechanic and loads of free spins to enjoy.

Age of Asgard is a five reel slot with two sets of reels, each with twenty paylines; those reels spin within an ornate wooden structure sheltering them from the harsh, snowy conditions blowing in from the distant, snow-capped mountains.

High value symbols in this game include three humans and three monsters in the top and bottom sets respectively along with a separate set of four runes in each.

Wild symbols three positions high and can be nudged into full view when they land – there’s the hammer-wielding girl on the top reels and the chained monster on the bottom, both replacing all standard symbols to help create winning combos.

The free spins symbols are the bonus icons which activate the main feature.

Landing a wild symbol fully in view will lock that wild in place and award a free repin – if another new wild lands the process repeats.

This is triggered by landing one wild completely in view on the same reel on both sets; wilds are now added onto existing reel positions, turning any high value symbols into more wild symbols.

Landing three of the free spins bonus symbols on either set of reels will award ten free spins on that set which will now expand to six rows with fifty paylines; there’s a new stacked wild in play here which is able to trigger the Wild Respins and Clash features.

Age of Asgard is a clever slot and slightly more complicated than Yggdrasil’s usual excellent output; however it’s alot of fun once you get to grips with the various features and of course it’s designed to the highest quality.