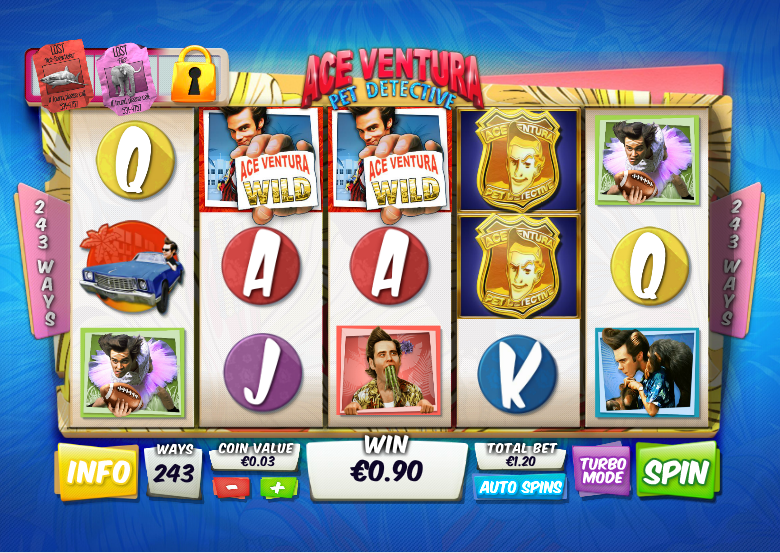 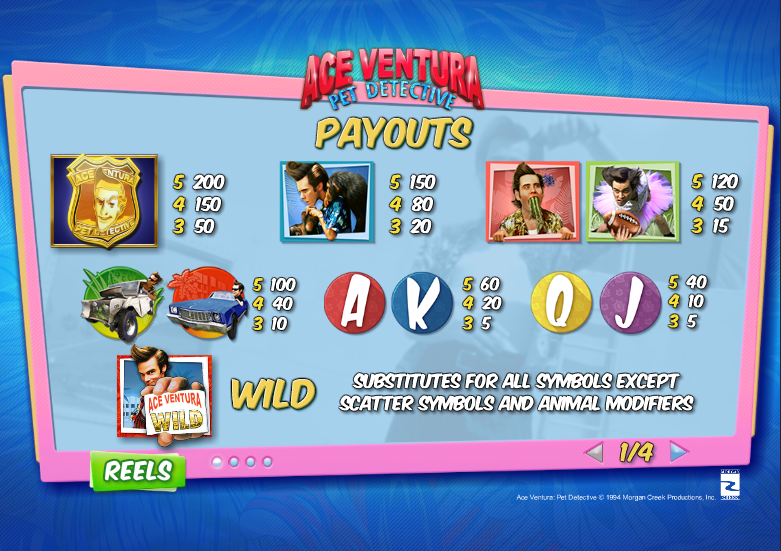 Back in 1995 Jim Carrey starred in an extraordinary movie called Ace Venture: Pet Detective as the eponymous character who investigates the case of a missing dolphin; calling it a comedy classic is probably a bit ambitious but it certainly had some laughs. This theme now forms the basis of an online slot of the same name, developed by Playtech and full of interesting bonus features.

Ace Venture: Pet Detective is a five reel slot with three rows and 243 ways to win; those reels are a colourful collage of colours on a plain blue backdrop and there’s some jaunty background music to keep things cheerful.

The six high value symbols are all different views of Ace – on a marshal’s badge, on a motorbike with a monkey, with a mouth full of asparagus, with a pink ruff, in a Land Rover and in a cabriolet; lower values are the usual J, Q, K and A.

The wild symbol is Ace brandishing his business card and it will substitute for all others except the bonus symbol and the animal modifier cards; the bonus is represented by a Rhinoceros with a pair of legs sticking out of it’s backside. The modifier cards are explained below.

These three extras occur in the base game and work like this:

This is triggered by landing three of the bonus symbols anywhere on reels one, three and five; you will now receive seven free spins with two animal modifier features added to the mix. Animal modifiers are six cards available to collect on reel five during the base game; you can have a maximum of three and adding a new one will knock one of the others off. They have the following qualities:

Ace venture: Pet Detective is certainly the best Playtech slot we’ve played for a while; it sticks to the theme of the original film very closely with lots of amusing sound effects and it has loads of extra features to keep things interesting – the RTP is 96.18%.