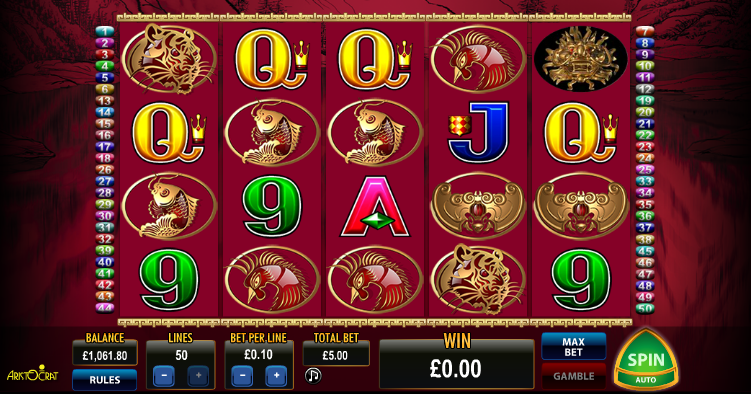 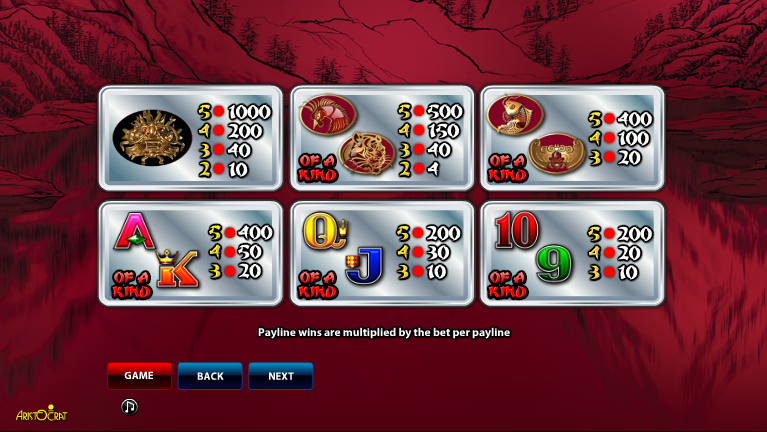 One of the most common genres of online slot is that which focuses on the mysterious east. We tend to refer to them as oriental slots and most of the main developers have at least one in their locker. 50 Dragons is another to add to the list and it’s from Aristocrat Leisure, an Australian developer slowly making inroads into other markets.

50 Dragons is a five reel slot with fifty paylines and a nicely designed game screen. The picture in the background is faint but it is reminiscent of a style of Chinese landscape art which will be familiar to most.

Stylised animal symbols represent the main icons and these include a chicken, tiger, monkey, lion and fish. The lion is the most valuable and worth 1000x your line stake for five on an active payline. The lower values are comprised of 9, 10, J, Q, K and A.

The wild symbol is a pearl resting on a golden stand and the scatter symbol which triggers the main feature is a gold ingot.

The gold ingots only appear on reels one, two and three and you will need to land all three anywhere on those reels to trigger this feature.

When the free spins get underway you will find that an extra pearl wild is added to reels one, two, three or four on every spin. Obviously this means that by the tenth spin you should be landing some big wild-related wins.

It’s also possible to re-trigger some spins but only five of them and only once. There is no multiplier value applied to your wins.

After each win you can gamble that amount by clicking the ‘Gamble’ button below the reels. Try and double or quadruple your win by correctly guessing which card colour or suit will be drawn next.

Beware the gamble feature! it’s tough to profit from this feature so think twice before wagering your winnings.

This is a perfectly passable slot which lacks a little bit of creativity. The background music could be more tuned to the theme and less grating but that’s our only gripe.