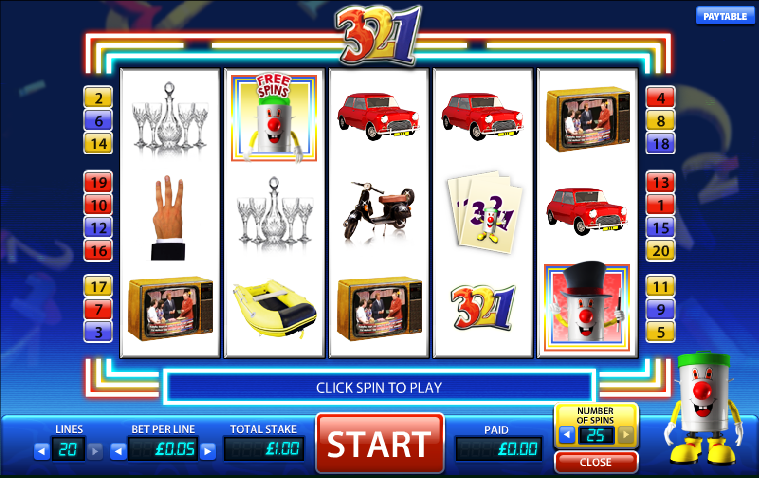 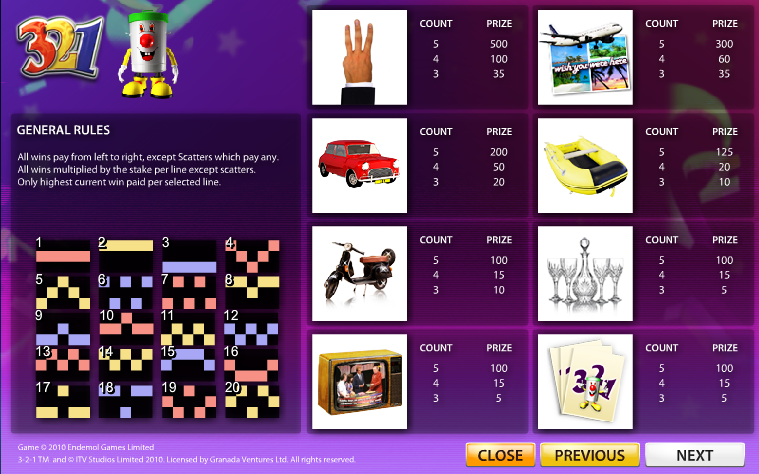 Many of us surely look back fondly on 3-2-1, the television game show hosted by Ted Rogers; it ran from 1978 until 1988 and offered the famous Dusty Bin character as the booby prize. Endemol have developed an online slot machine themed on this programme and about time too – read all about it below.

321 is a five reel slot with three rows and up to twenty paylines; the design looks contemporary with neon lights and prime colours setting the scene for the gameshow which is about to begin – the accompanying sound effects are also suitable basic.

The symbols are all related to the television show and include Ted Rogers hand (displaying the famous 321) and various prizes – a mini, a moped, a television, a holiday, a dinghy, some crystalware and the playing cards.

The 321 logo is wild and it will substitute for all others to make a winning combo except for the three different Dusty Bin scatters; the wild will also double any wins to which it contributes.

Trigger this by landing three or more of the card-holding Dusty Bins anywhere in view; you will now play a picking game in which you must find words which are longer than your opponents to advance through five game rounds. Get as far as you can for bigger prizes but finding Dusty will end the round.

This is triggered by landing three or more of the entertainer Dusty Bins anywhere on the reels; you must now play a mini-game in which the object is to collect variety acts – the more you collect, the bigger the prize but finding Dusty will once again end the round.

321 is an excellent attempt at creating the atmosphere and gameplay of the original television show and is a slot which we thoroughly recommend. It comes with an RTP of 95.49%.