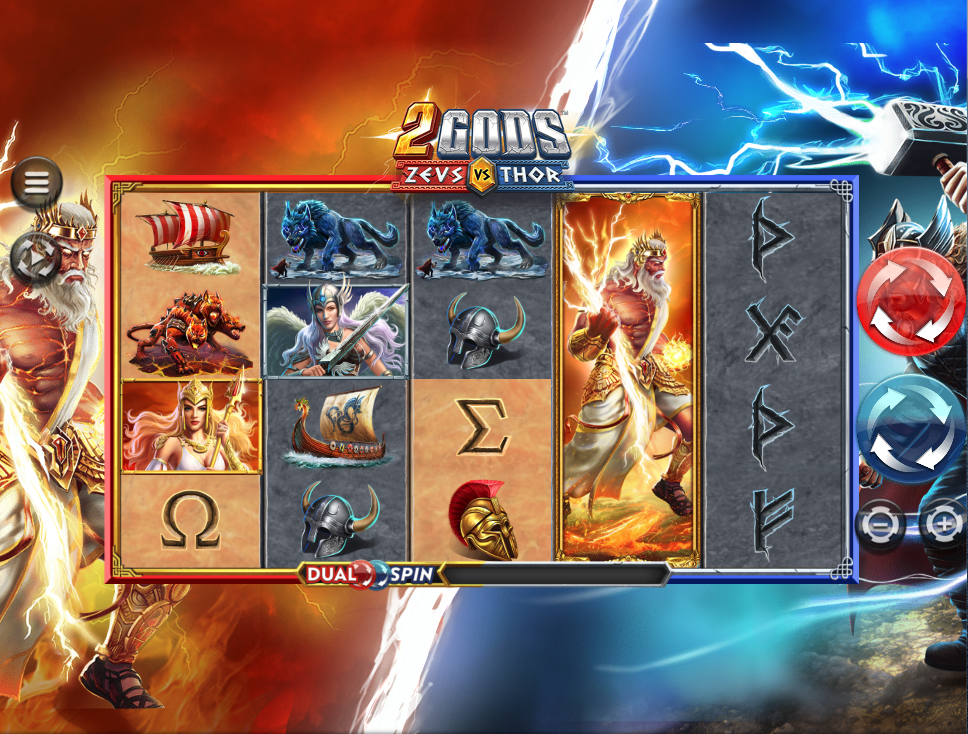 The theme of this online slot from 4ThePlayer is a fictional battle between the Norse god Thor and the Greek god Zeus; it’s called 2 Gods: Zeus vs Thor and it features a clever two-way gameplay mechanic along with the lucrative Win Spin bonus.

2 Gods: Zeus vs Thor is a five reel slot with four rows and 1024 ways to win in either direction (we’ll explain how this works shortly); behind those reels Zeus occupies the left hand side of the screen while Thor and his hammer have control of the right.

Zeus and Thor are both wild and they will only substitute for their own colour standard symbols; the red and blue Win Spins symbols are the scatters.

Let’s explain how the Dual Spin gameplay works first of all and you’ll see there are two spin buttons by the reels – blue and red. You can select either one and the reels will spin with paylines going in both directions – red left to right and blue right to left. Your colour selection matters because if you’ve selected red and land a red win it will be doubled and the same happens if you’ve selected blue.

This feature is triggered by landing three of the red/blue Win Spin scatter symbols on reels one, three and five; you’ll receive the following depending on whether the spin was red or blue:

Every Win Spin is a guaranteed win and any multiplier earned from landing a win of the same colour as the spin will be carried over to the next spin. More Win Spins can be won in the same manner.

We like the premise of 2 Gods and we like the innovative gameplay involved in the Dual Spin selection – it’s not something we’ve seen before and that’s always a good thing. Note that the Autoplay will allow you to set up a number spins with alternating colours if that’s what you fancy. A healthy RTP of 96.50% tops it all off nicely.