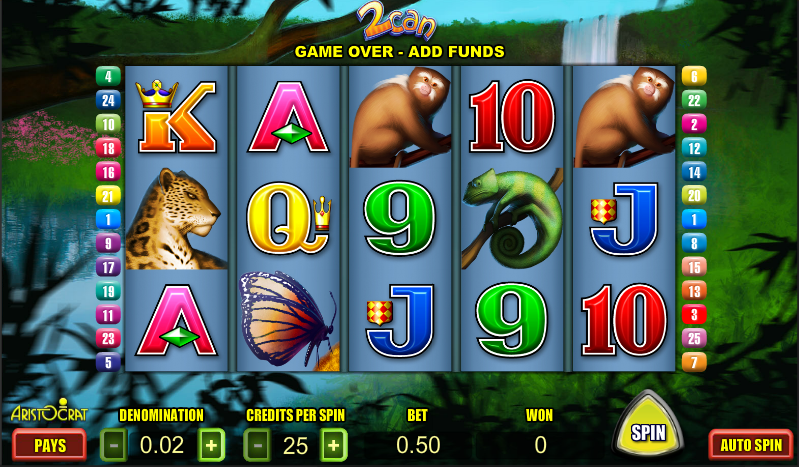 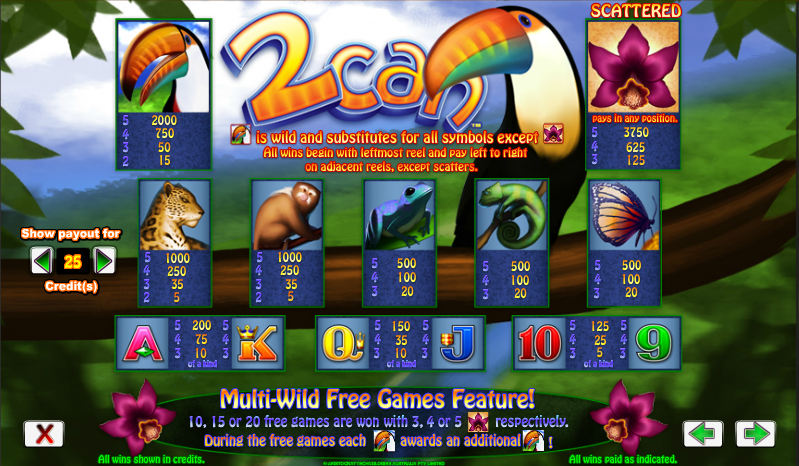 We like an online slot with some cute animal characters involved and we also like one with a half-hearted pun as a title. This game is from Aristocrat and it’s called 2 Can, a barely disguised reference to the word ‘Toucan’ and it’s that character who occupies the central role here. We haven’t played too many Aristocrat machines in the past so read on to find out more about this one.

2 Can is a five reel slot with twenty five fixed paylines and true to it’s theme, it all takes place in a wooded environment. A waterfall in the distance empties into a pool which stretches down to the bottom left hand corner of the scree.

Five different animals represent the main symbols and these are a butterfly, a lizard, a frog, a monkey and a leopard. Lower value symbols are the standard 9, 10, J, Q, K and A.

Special symbols here are the Toucan who is wild and then a purple flower which represents the scatter symbol. That flower also activates the main feature.

There’s just one feature here and it’s a free spins round which is triggered by landing three, four or five of the purple flower scatter symbols anywhere on the reels. You will receive 10, 15 or 20 free spins respectively.

There’s a bit more to it though and that extra stuff involves the Toucan wild symbol. Every time that Toucan lands on the reels during the spins, it will fly off the left hand side of the screen and return with a friend. The original one will head back to where it came from and the other one will land on a random spot, turning it wild.

To be honest this is a fairly run-of-the-mill outing enlivened only slightly by the Toucans which fly around handing out wilds. If you like animal-themed slots this may be worth a bash but there are better ones out there.