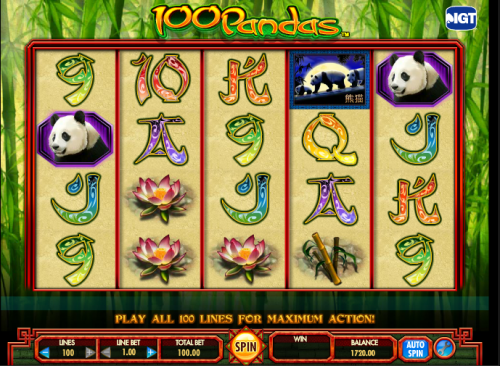 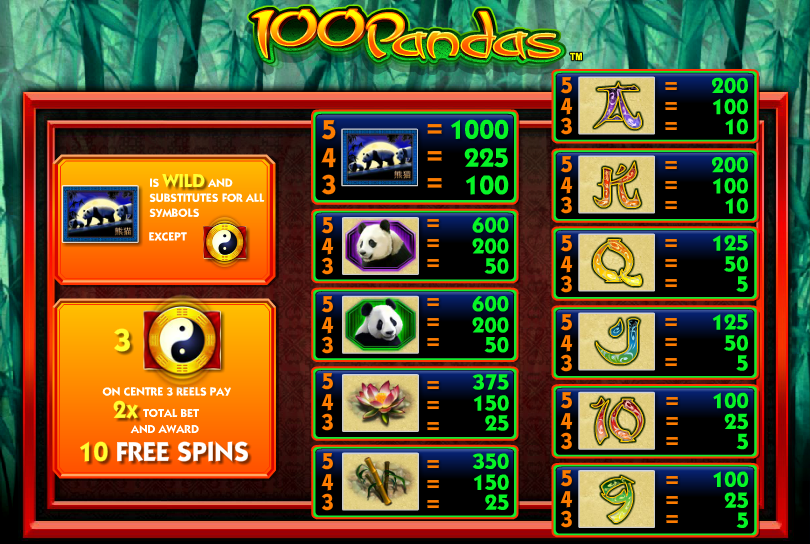 Occasionally a slot is released which is so similar to an offering from a different company that you wonder if they haven’t seen each others plans.  100 Pandas is a new slot from IGT and if you take a quick look at our review of Playtech‘s Lucky Panda you’ll see what we mean.  Fortunately both games are eminently playable so everyone’s a winner.

100 Pandas is set against a backdrop of a bamboo forest and of course there’s Chinese feel to the proceedings which includes the soundtrack.  There are five reels and 100 possible paylines which pretty much means that as long as you have matching symbols in adjacent reels you on to a winner.

The low value playing card symbols all have a Kanji-type feel to them while the high value symbols include bamboo, a lotus flower, pandas on green and purple backgrounds and a panda family which is the wild symbol.  The bonus symbol is a Yin and Yang and this changes colour depending on whether you are in the bonus round or not.

Free Spins
Landing three of the Yin and Yang bonus symbols on reels two, three and four will grant you access to the 100 Pandas bonus game which rewards you with 10 free spins and a 2x multiplier.

While you are in the bonus round all the symbols change colour; for example the Yin and Yang symbol’s outer edge turns from yellow to red and the background to the wild symbol changes from blue to purple (the panda family also face right rather than left).

While in the bonus game, landing three more Yin and Yangs on the centre three reels wins 10 more spins with a 2x multiplier.

If you ignore the similarity to Lucky Panda and play this game on it’s own merits it’s certainly a playable online slot.  Graphically it looks good and the background sounds add to the oriental atmosphere.