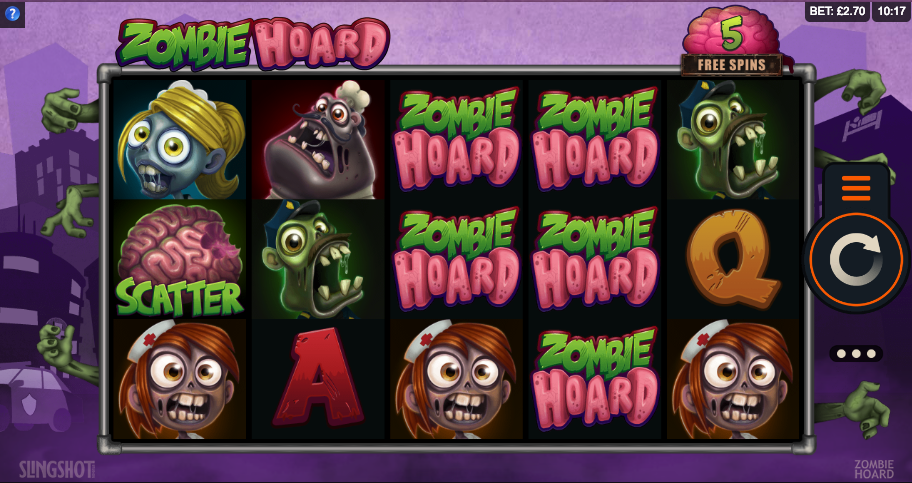 It’s quite hard to avoid zombies these days , ever-present as they are in films, TV shows, comics and the like and this ubiquity extends also to the online slot machine, in this case in the shape of Zombie Hoard. It’s developed by Microgaming/Slingshot Studios and it comes with wild features and undead free spins.

Zombie Hoard is a five reel slot with three rows and nine fixed paylines; green limbs poke out from behind those reels which float against a purple, silhouetted city backdrop.

Four different zombies represent the higher value symbols – one grey, one green, one blue and a nurse – while 10, J, Q, K and A make up the lower values.

The Zombie Hoard logo is wild and it will replace all others to help form winning matches except for the pink brain scatter symbol. The wild symbols are stacked on reels three and four in the base game.

You may have noticed the brain in the top right hand corner which displays a number of free spins; this is incremented each time a token attaches itself to one of the lower value symbols.

That number of spins are triggered by landing at least three scattered brains anywhere in view or if the total on the brain reaches thirty. During this round all wins will be multiplied by 2x and the wild symbol can appear stacked on all reels.

There are no scatter symbols in the free spins so it’s not possible to retrigger this round in that manner.

Zombie Hoard is a cartoonish look at the grim word of the zombie and it’s a slot which brings a bit of cheer to what would probably be quite a tense situation; the big wins are in the free spins round which you’ll reach eventually if you stick at it.