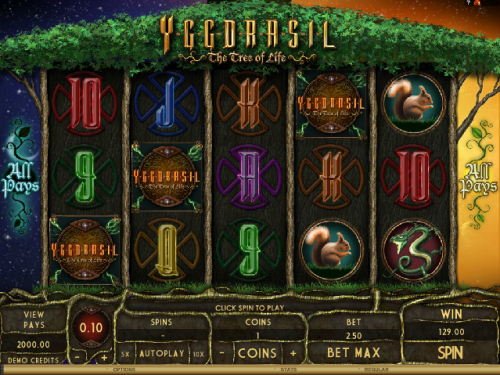 If you’ve been looking for an online slot machine with a strange name and one that is awkward to pronounce then you’ve arrived at the right page.  Yggdrasil – The Tree Of Life may sound like a made up name but something that bizarre must have a basis in reality and it refers to Norse mythology and the gigantic tree of life referenced in the Poetic Edda and the Prose Edda, two 13th century Old Norse manuscripts.

Yggdrasil is a lovely looking game from Genesis Gaming which might lack some of the 3D features of other machines but  which makes up for that with some beautifully rendered graphics.  The reels are embedded within a tree set against a nocturnal backdrop.  There are five reels and twenty five paylines with the lower value symbols made up of 9, 10, J, Q, K and A; the higher value symbols are forest creatures such as a deer, a squirrel, a snake and a bird.  The Yggdrasil logo is the scatter symbol and the wild is represented by a ferocious looking warrior.

If you’re lucky enough to land three of the Yggdrasil logos anywhere on the reels during one spin then you’ll trigger the Yggdrasil feature.  This is a really well-rendered game with three levels as follows.

You’ll always reach the Branches during the bonus game so this can be a real money spinning aspect of the game.

We haven’t reviewed many slots from Genesis Gaming but hope to if they maintain this sort of standard.  You can even play ‘regular’ or ‘expert’ versions of the game (the small option on the bottom right of the screen) with the latter offering the player options such as Autoplay and more wagering varieties.