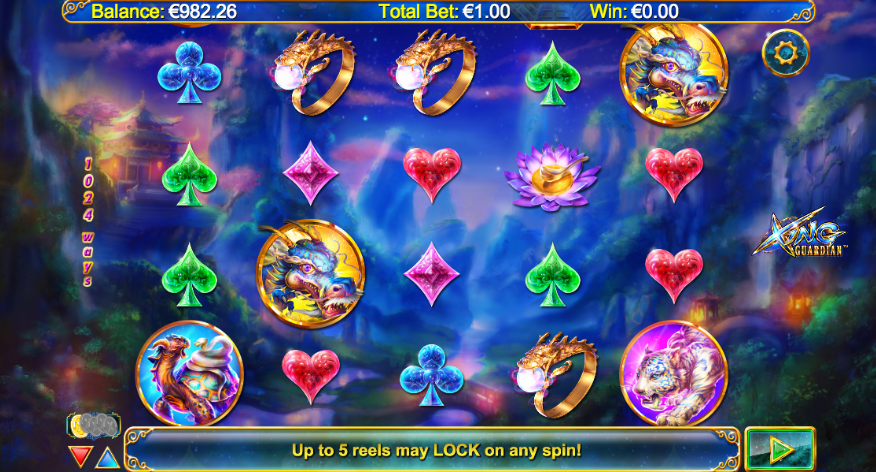 Many online slots with an oriental theme are based on characters from Eastern myths and legends but that doesn’t seem to be the case with Xing Guardian, a release from Nextgen Gaming with some good looks and several bonus features – read all about it below.

Xing Guardian is a five reel slot with four rows and 1024 ways to win – there’s no payline structure and wins are formed as long as there are matching symbols in adjacent rows starting from the left hand side. Behind the transparent reels there’s a dreamlike view of lanterns, mountains and temples to enhance the oriental atmosphere.

There are plenty of nicely designed symbols on show here and they include a dragon, a phoenix, a tiger, a turtle, a gold ring and a flower; lower values are playing card symbols of various colours – red, pink, green and blue.

The Xing Guardian represents the wild symbol, she can appear stacked on the reels and she will substitute for all others to help form winning combos except for the Yin Yang scatter.

Rise of the Dragon

This can occur randomly on any base game spin and you will see a dragon appear on the screen to unveil a stack of wilds on at least one reel.

The Xing Guardian can appear on any base game spin and lock at least two adjacent reels together with matching symbol positions; potentially all five reels can lock together for a massive win.

This is triggered by landing three or more of the Yin Yang scatter symbols anywhere in view for which you will receive ten free spins; on each spin the Xing Guardian Locked Reels feature will trigger for some bigger wins. Landing three more scatters during this round will award five extra spins.

Xing Guardian is a very atmospheric slot with some lovely graphics and animations to complement the gameplay; the sound effects add to the mix, the bonuses seem to trigger regularly and there’s an RTP of 97.01%.