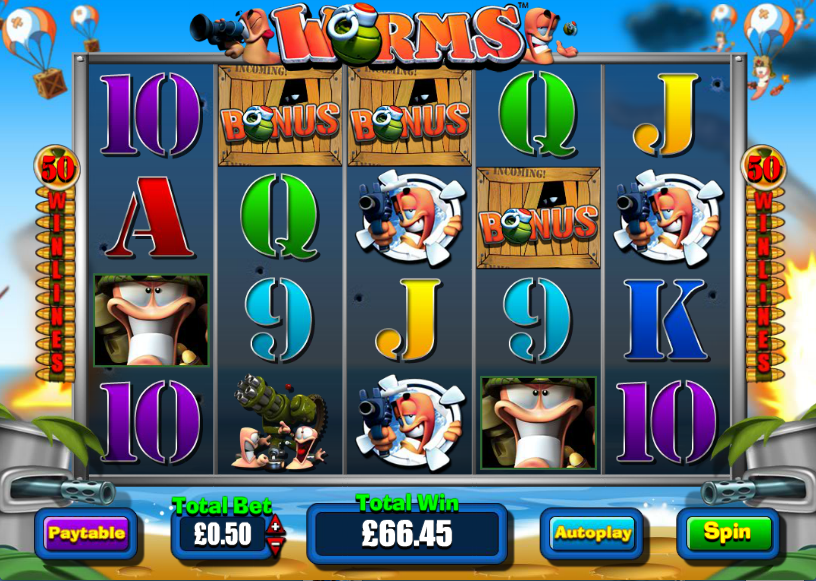 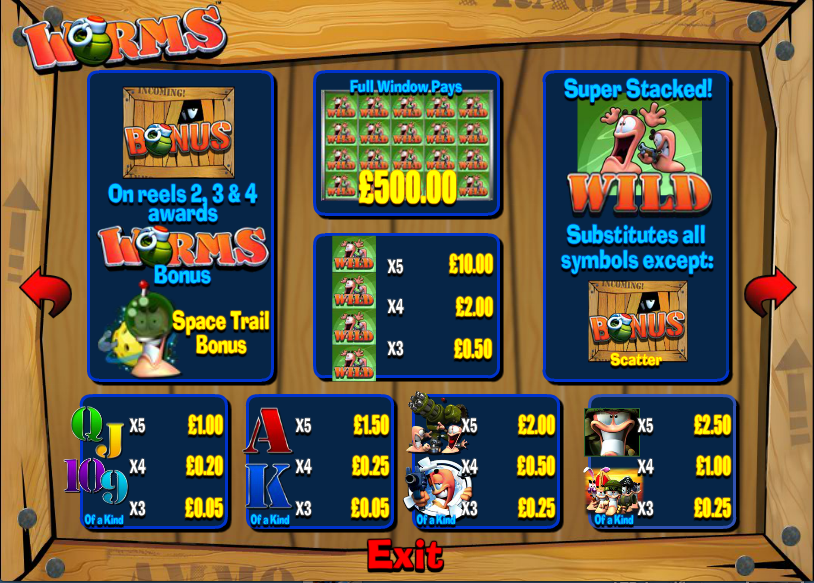 Any video gamer of a certain age will confirm the fact that Worms was one of the defining games of the 1990s; it was a turn based artillery challenge in which you would fire various types of projectiles across the screen in an effort to defeat your enemy. After dozens of sequels there is now an online slot called Worms and it’s from Blueprint Gaming.

Worms is a five reel slot with fifty fixed paylines and anyone familiar with the video game will recognise the graphics from the original version – Blueprint have done a really good job of transferring the look of the game. Explosions and parachuting worms fill the background and a martial soundtrack accompanies your gameplay.

The main symbols are represented by various worm characters recognisable from the original game and there lower values are the standard 9, 10, J, Q, K and A.

The wild symbols is represented by the scared worm you see to the right; it also appears stacked on the reels which means big wins can result if you hit the right combos. The famous Worms crate is the bonus symbols which activates the main feature.

The crate appears on reels two, three, four and five and landing three or more in view will trigger the bonus. You will be asked to pick one of those crates (as you can see from the video above) and you’ll be awarded one of the following bonus rounds:

This is shown in the video above and you will get to spin the reels and win money, watching out for three different symbols to land on the centre reel:

Extra wilds are added to the reels during the spins but when your health reaches zero, the round is over.

Here you are trying to work you way along a bonus trail to collect ever increasing multiplier values. Select one of the toolboxes on the right hand side and it will contain an ‘Advance’ or a weapon. Advance will move you along the trail and if the weapon hits you the round is over.

Here you must pick from the crates on show to either side of the Scottish worm; each crate will contain either a prize, a weapon or some health. You can keep collecting prizes until enough weapons have hit you to deplete your energy; that energy is partially restored by the health kit.

This is a great game, especially if you hark back to those bygone gaming days of the 1990s. This may not be a game for ultra low rollers because of the fixed number of paylines but there’s always plenty of action at hand and the bonus features are well though out.