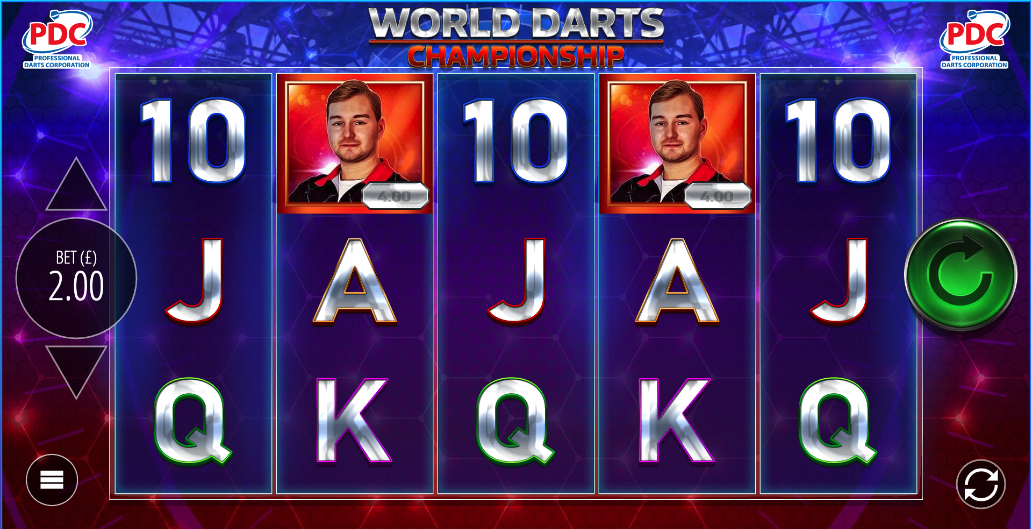 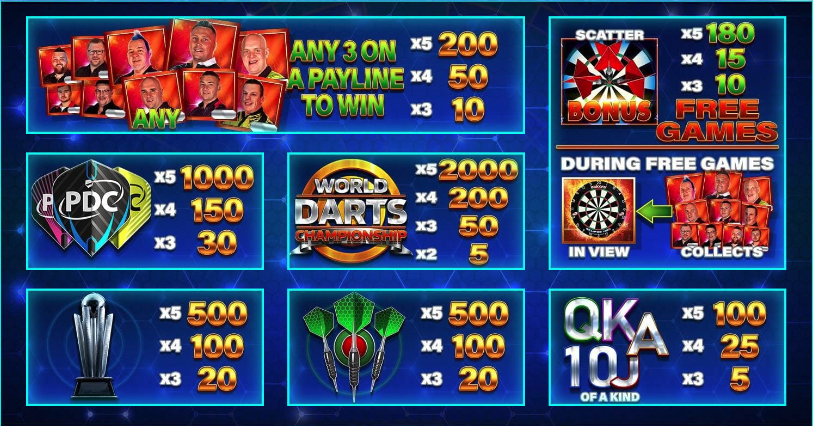 Darts may not be a sport which showcases athletic ability but it does demonstrate world beating accuracy with a tiny spear at just under ten feet; World Darts Championship is an online slot themed on this pub pastime from Blueprint Gaming with the official seal of approval from the PDC (Professional Darts Corporation) and, from £0.10 per spin, free spins and wins from mixed symbols.

World Darts Championship is a five reel slot with three rows and ten fixed paylines; there’s a glitzy backdrop those reels which suggests the setting for some large UK tournament.

Ten PDC players who’ll probably be familiar to darts fans represent some of the symbols and they will also payout for any three, four or five mixed on a payline; other symbols include flights, the games logo, a trophy and a set of darts. Lower values are 10, J, Q, K and A. The dart board is the wild and the bonus bullseye is the scatter symbol.

Landing three, four or five of the bonus bullseye scatter symbols anywhere in view will award 10, 15 or a very appropriate 180 free spins respectively; you’ll now have a choice between two free spin modes with either all or just one of the PDC players involved in the spins.

The players will all have cash values attached when they land and if you can also land a wild dartboard on that spin you’ll win the collected values of all those players. It’s not possible to trigger any more spins from within this feature.

The plus points of this slot are that it’s an officially branded game featuring all the well-known players from the PDC and there are some big wins available in the free spins; cons are that we’ve seen better from Blueprint Gaming in terms of features and gameplay. Still, darts fans will love this so if that’s you give it a try!

Yes! The free spins round with player collection feature.

The Return To Player percentage for World Darts Championship is 95.55%.

How To Win On World Darts Championship?

Land at least three matching or mixed player symbols or wilds on an active payline starting from the left hand side; trigger the free spins.

Where can I play World Darts Championship then?