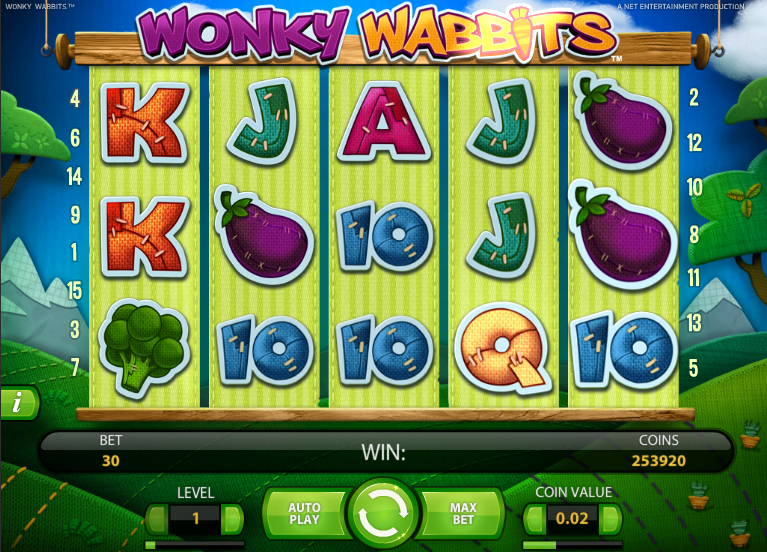 It’s always good to get to check out a brand new online slot and it’s an extra pleasure when it’s a Net Entertainment release. Wonky Wabbits has been in the pipeline for a little while now but at last it’s available to play at several of our recommended casinos. It looks as good as you would expect from a Net Ent game but read on for more details.

Wonky Wabbits plays out over five reels and fifteen fixed paylines and of course it looks great; there’s a patchwork, cartoonish design to this slot with trees, mountains and a blue sky in the background. All the symbols have that stitched up quality also from the lower value playing card icons up to the various vegetables which are worth more – sweetcorn, carrots, tomatoes and the like.

The wild symbol is a big purple and yellow ‘Wild’ and that’s also the key to the bonus feature in this game. Note that wins pay right to left as well as left to right in this game.

In common with a number of Net Ent games, the bonus feature is built into the main game and although this doesn’t work for everyone, it brings something different to what can be a pretty samey industry.

The wilds appear on all reels and are stacked on reels two and four which means they can appear on top of one another and in fact can fill up the whole reel.

Every time you land a wild it will duplicate itself into the best winning position on the reels. If you land two wilds, two extra ones will appear and so on. If you are really lucky and land the stacked wilds you ‘re in for some big wins.

This is another great Net Entertainment game but it’s the sort of slot that you should just set the Autoplay, sit back and watch. There’s very little interactivity here so it might not be everyone’s cup of tea but it looks and sounds good and we like it.