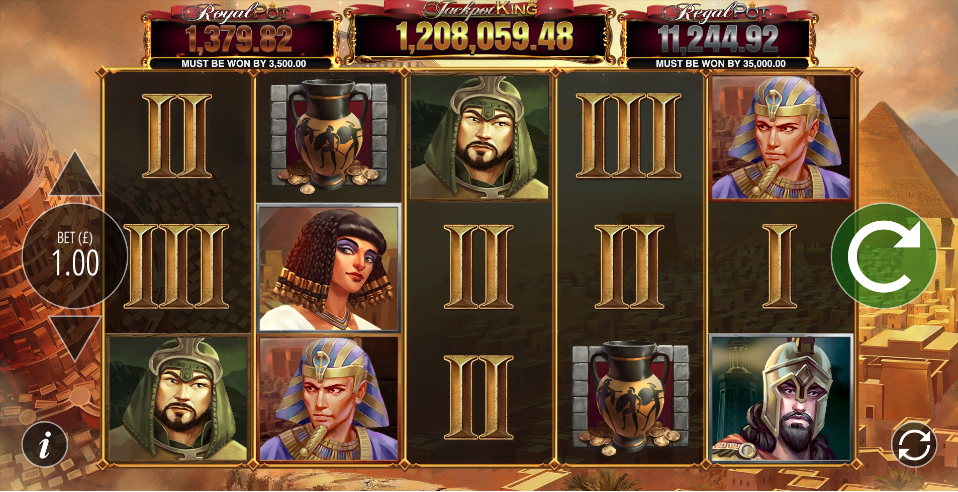 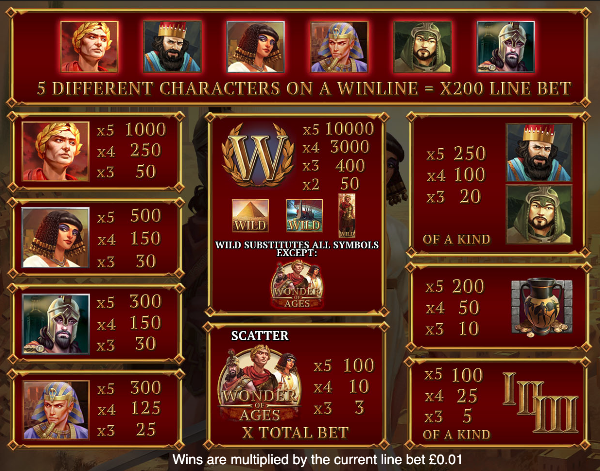 Many online slot machines are themed on historical characters and events but here’s one which gathers six famous people together to create Wonder of Ages, a release from Blueprint Gaming which tempts players with various free spins features and the Jackpot King progressive jackpot.

Wonder of Ages is a five reel slot with three rows and twenty fixed paylines; behind those reels there’s a collage of famous buildings including pyramids and the Colosseum.

The high value symbols are the six famous faces and we think they are Julius Caesar, Cleopatra, Tutankhamun, Genghis Khan, Mark Anthony and Alexander the Great; an amphora and the Roman numerals I, II and III are the lower values. The big ‘W’ is wild and it will replace all standard symbols to help form winning matches; the scatter symbol is the collection of characters.

Landing at least three of the character scatter symbols anywhere in view will trigger this feature and it’s time to play a picking game in which you select coins from a grid until three matching ones determine the feature awarded. When the feature ends you’ll return to the coins again to try and win another – this continues until you find the Fallen Temple coin.

Angel Princess is part of Blueprint Gaming’s Jackpot King progressive jackpot series and this feature is triggered by landing five jackpot symbols on the reels. You’ll then play a reel set where the aim is to collect crowns before the round ends – manage at least 15 and you’ll get to spin the wheel of fortune which could win you the progressive jackpot.

Wonder of Ages mixes up those legendary characters in an interesting way to create a slot with plenty of variety and free spins themed on the their (sometimes) competing dynasties and empires. The progressive jackpot is the historical cherry on top.