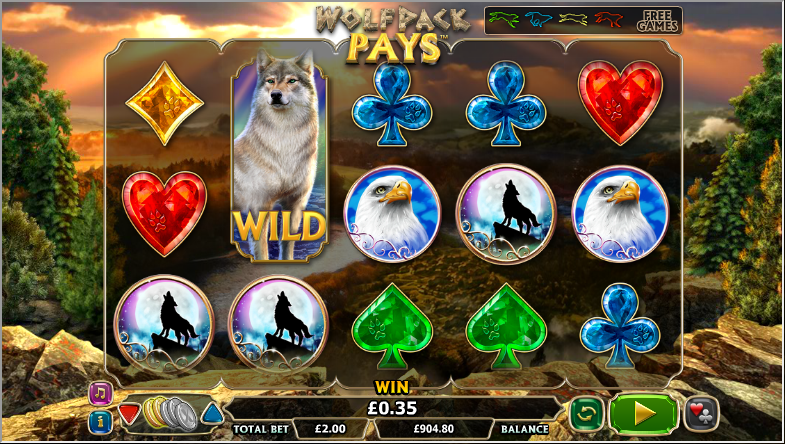 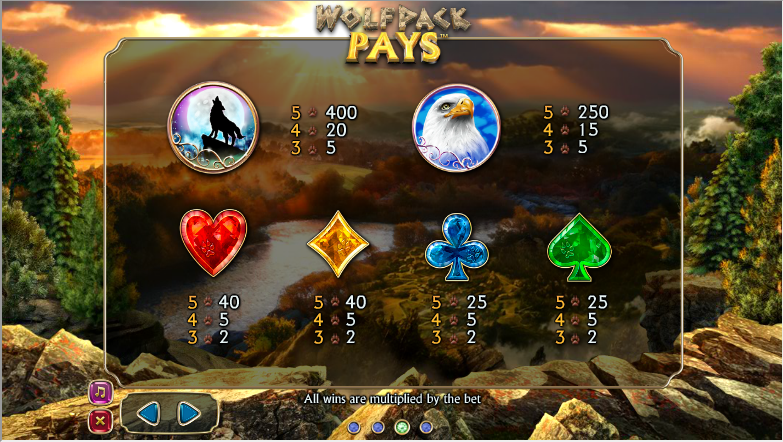 In some unspecified country there’s a scenic mountain wilderness where wild animals roam the land and the noble wolf is the creature to be feared. Wolfpack Pays is the name of this game, it’s developed by Nextgen Gaming and it comes with an interesting bonus feature we’ve not seem before – you can read about it in more detail below.

Wolfpack Pays is a five reel slot with three rows and 243 paylines; the attractive symbols spin on a transparent set of reels through which we can see this wild, rocky landscape partially lit by the sun breaking through the clouds.

There are just six standard symbols and only two related to the theme – an eagle and a wolf howling at the moon; the others are represented by hearts, clubs, spades and diamonds of different colours.

The wild symbol is the wolf pack leader, he substitutes for all others but only appears when the feature starts.

Wolfpack On A Roll!

The feature is integrated into the base game and it’s triggered each time you land a winning combo. You will now receive a free spin with an extra wild added to the reel set. Each consecutive win awards another spin and an extra wild and if you have four wins in a row the free spins round will start.

Each win can be gambled by clicking the hearts/clubs button below the reels; you can now try and double or quadruple your winnings by guessing the colour or suit of the next card drawn.

Wolfpack Pays provides us with an innovative and enjoyable bonus feature to go with a high quality game and it’s certainly one we recommend. It comes with an RTP of 97.76%.