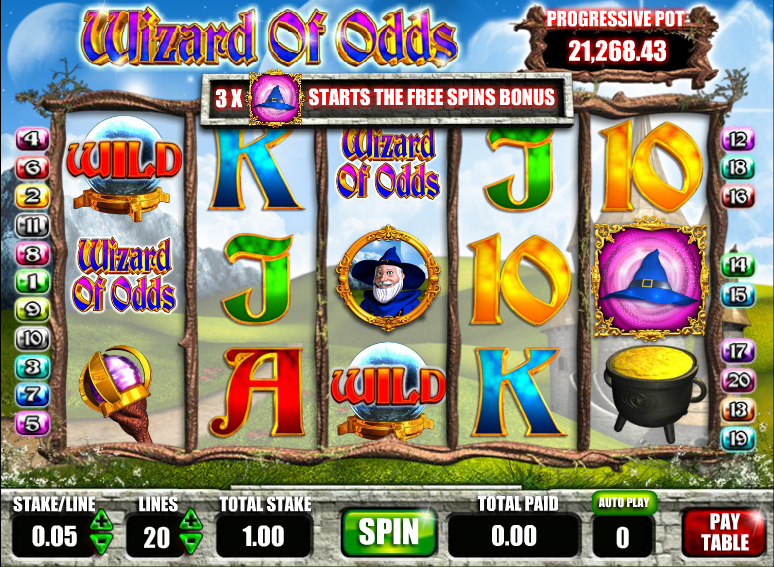 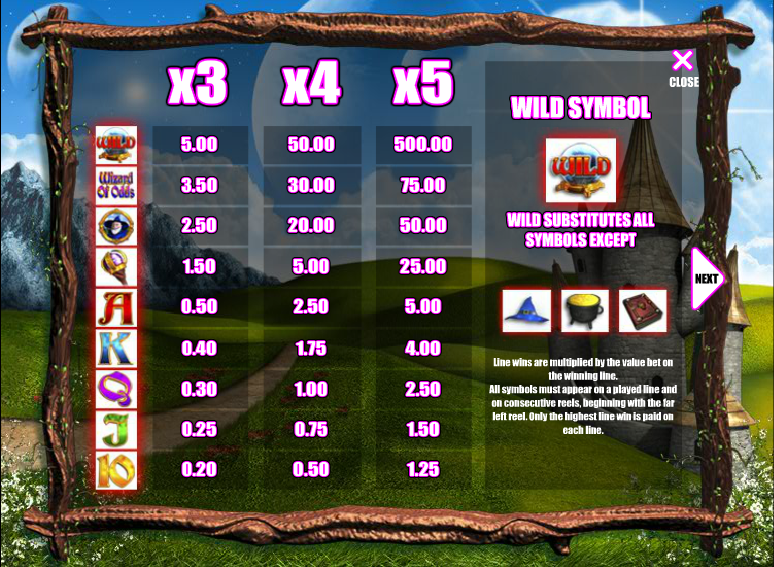 Join us as we journey into a laboratory full of potions, cauldrons and spell books to play this release from Mazooma Interactive. It’s called Wizard Of Odds and it joins a number of other wizardry-themed games we’ve reviewed in the past; the good news is that it contains several bonus features and a progressive jackpot.

Wizard Of Odds is a five reel slot with three rows and twenty paylines, all played out against a pleasant backdrop of rolling hills and snow-capped mountains.

There are only three high value symbols – the wizard’s staff, the wizard and the game’s logo – with the remainder comprising 10, J, Q, K and A.

The crystal ball is wild and there are three bonus symbols – the wizard’s hat, the spell book and the cauldron – which each activate separate features.

This snazzy piece of apparel appears only on reels two, four and five but landing three in view will trigger this game.  Initially you will be prompted to select one of the hats on display to determine the number of free spins awarded after which you pick another to reveal the multiplier for your wins.

None of the bonuses can be won from within this feature.

The spell book appears only on reel three but if you can land it in view a large book will open up on the screen. You’ll win a random prize amount which will count up until the machine decodes you’ve on enough.

This is triggered by landing the cauldron symbols on reels one, three and five; you will now see the wizard standing by his cauldron with six potion bottles. Pick a bottle to pour into the cauldron for a cash prize; now do it again for more money.

The progressive jackpot is won while playing the Cauldron Bonus; if the concoction in the cauldron explodes while you are adding bottles, you win the big bucks!

We always favour slots with lots of bonus features and Wizard Of Odds looks and sounds good, however it’s got a rather low RTP of 92.90%. The progressive jackpot spices things up a bit.