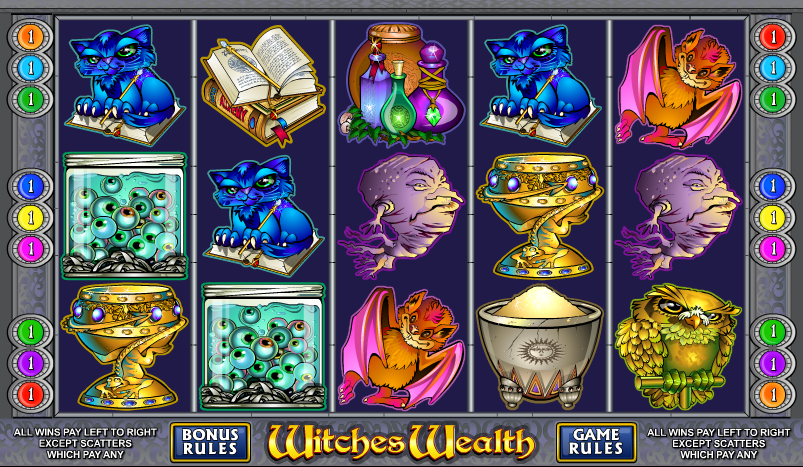 Do witches harbour a desire to acquire wealth? Surely they just live in caves and shabby old houses in the woods? Not according to this online slot from Microgaming – it’s called Witches Wealth and it suggests that in fact witches do like money and material items just as much as the next person.

Witches Wealth is a really good looking slot which plays out over nine paylines and five reels; the heroine of this tale is Serena the witch but equally as important is her cat, Mr Twinkles.

There are some brilliantly-drawn symbols and they’re all related to witchcraft – there’s an old crone, a jar full of eyeballs, a diamond-studded gold cup, a bowl of some suspicious-looking powder, a collection of vials, spell books and an owl.

Serena the witch is wild, Mr Twinkles the cat is a bonus symbols and there’s one more animal, a bat, which provides your scatter wins.

There are two bonus features associated with this blue-haired moggy and they play out as follows:

Keep those paylines maxed out to increase your chances of triggering the features – the cats have to land on an active payline.

We like this slot; there’s a lack of interactivity in the bonus features but that doesn’t really matter. It looks and sounds good and we have no reason to begrudge those witches their wealth.