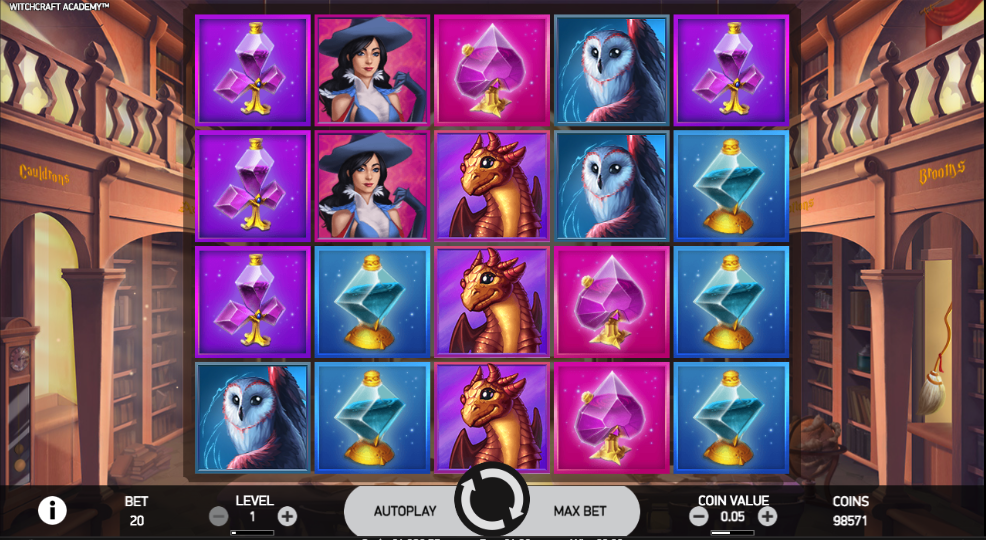 Well this looks slightly familiar – it’s an online slot machine from Net Entertainment with more than a passing resemblance to a certain Harry Potter; it’s called Witchcraft Academy and it comes with plenty of wizardy bonus features – find out how it all works right here.

Witchcraft Academy is a five reel slot with four rows and twenty fixed paylines; those reels spin in the lofty confines of a great hall in which various magical items and spell books are stored.

The higher value symbols in this story are Efora the Witch, Earthan the Wizard, a baby dragon and an owl; pretty glass objects of red, pink, purple and green make up the lower values. Wins don’t have to start on the left hand side as long as they are in adjacent rows.

The wild is the logo of the school, it appears on reels one, two, four and five and it will substitute for all others to help form winning combinations except for the scatter and bonus symbols.

This is triggered by landing three or more of the bonus symbols anywhere in view and you’ll now be whisked to a screen displaying something which looks like a chess board with various characters in formation. Pick Efora or Earthan at the bottom of the screen and they will fire shots at the columns with the aim of uncovering three scatter symbols to trigger the free spins and extra feature to accompany those spins.

The free spins are activated via the method described above and you’ll receive five initially but landing two, three, four or five bonus symbols within the round will award 5, 10, 15 or 20 more spins respectively.

The extra features available via the Elements Bonus are:

In the video above we didn’t manage to activate the free spins.

Witchcraft Academy is a typically high quality slot from Net Entertainment with a two part bonus feature which can be a little bit hard to trigger, but maybe that’s was just our bad luck. There’s a suitably cinematic soundtrack, plenty of charming graphics and an RTP of 96.38%. Just don’t mention Harry or Hermione!