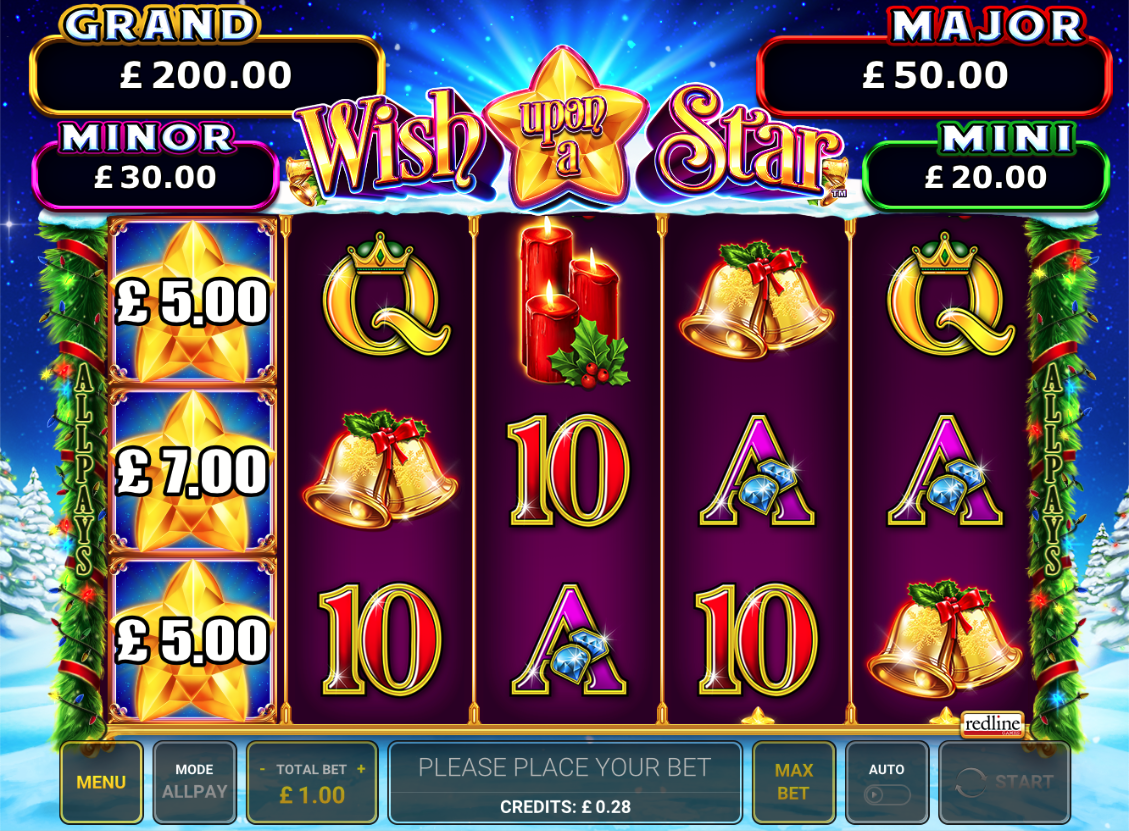 If Christmas is approaching fast then you may like to try out this seasonal online slot from Novomatic – it’s called Wish Upon A Star and from £0.25 per spin it tempts players with four jackpot prizes, respins and festive free spins.

Wish Upon A Star is a five reel slot with three reels and an AllPays payline structure in which combos are formed as long as there are matching symbols on adjacent reels starting from the left hand side. Fairy lights and tinsel frame those reels and there’s a scene of deep snow in the background.

High value symbols include the blonde girl, the Christmas tree, the candles, the candy cane and the bells; 10, J, Q, K and A make up the lower values. The yellow gift is wild while the bonus symbol and the star are the special icons.

Wish Upon A Star Bonus Features

The yellow gifts are not just wild symbols, they have another purpose as well and if you can land there stacked on a reel you’ll activate this feature; just pick one of those boxes to reveal the Mini, Minor, Major jackpot or a trigger of the free spins feature.

This is triggered via the method described above or by landing three of the bonus symbols on reels one, three and five; you’ll receive ten free spins with a 2x multiplier for all wins.

Wish Upon A Star Jackpots

Landing at least six of the star symbols anywhere in view will trigger this feature and you’ll receive three respins with those stars locked in place; each additional star will reset the number of spins to three again.

The round ends when there are three spins with no new stars or when all positions are full – you’ll receive all the prizes shown on the stars which can be bet multipliers up to 15x or the Mini, Minor and Major Jackpots. Filling all positions awards the Grand Jackpot of 200x the stake.

There’s not a great deal new in Wish Upon A Star but it’s entertaining enough festive fare with plenty of colour and three popular features. If it’s Christmas give it a try!