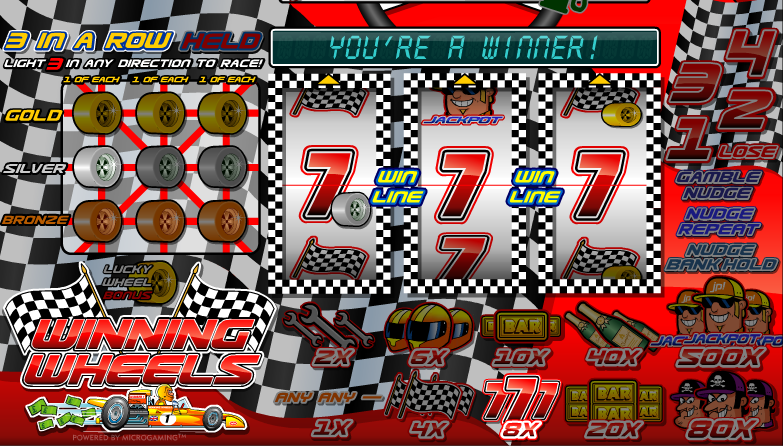 If you’re a fan pr motor racing then this could be the game for you; if you also like UK-style fruit machines then you’re definitely on to a winner here. Winning Wheels is an online slot from Microgaming with a cartoon quality and a slightly difficult-to-reach bonus feature which is nevertheless good fun.

Winning Wheels is a three reel slot with just the single payline and the theme is one of motor sport. With the exception of some standard sevens and bars, all the symbols are theme-related and include spanners, crash helmets, chequered flags, champagne bottles and two characters – one a goodie and one a baddie. The yellow-hatted hero is the highest paying symbol and worth 500x your stake for three matching.

Let’s have a look at the main feature then and you can see from the short video clip below that you’ll get to play a board game. It’s triggered by collecting the bronze, silver and gold wheels attached to some of the symbols on the payline; their position on the payline will light up the matching space on the grid to the left of the reels. Once you have three in a row in any direction, the feature will begin.

All you need to do is press ‘Spin’ and move around the board, hopefully avoiding the ‘Engine Failure’ and ‘Fuel Leak’ spaces. When you think your luck is about to run out, collect the next feature you win and head back to the base game.

Nudges are awarded randomly and permit the player to nudge single reels downwards to try and collect bonus wheels or make winning combos.

Holds are also random gifts and let the player freeze the reels and spin the others in the hope of matching symbols.

The feature is fun but doesn’t seem to give a particularly generous return; two matching symbols on reels one and two will pay back your stake so sometimes is worth nudging for that outcome rather than always trying for the feature.

When playing the feature, watch out for the dropping fuel level, it’s game over it your gas runs out.

It took us a little while to get to grips with this slot but once we did it was a lot of fun. It ticks along briskly and if you apply a bit of strategy the feature is not too hard to trigger.