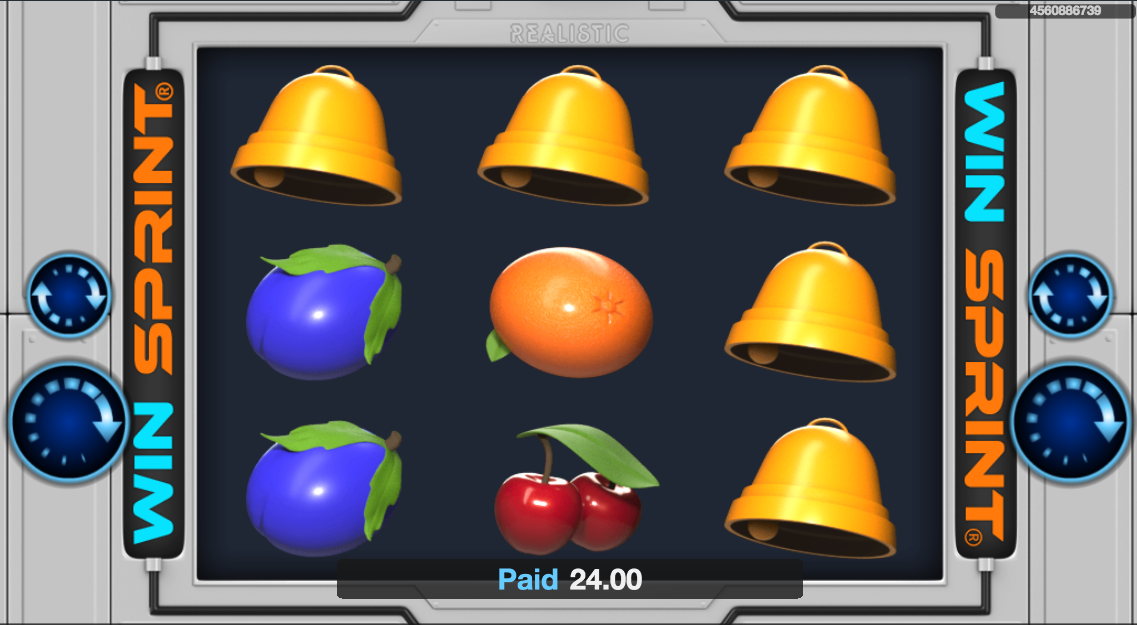 It’s time to get right back to basics now as we check out this glossy fruity online slot machine from Realistic Games; it’s called Win Sprint and the gameplay and the features revolve around the letters in the title and you find out how it all works below.

Win Sprint is a three reel slot with three rows and five paylines and there’s a futuristic as well as a fruity design for this game as you can see from the screenshot above; there’s a metallic grey surround for the reels with black wires powering the ‘Win Sprint’ signs which run up and down the sides of the reels.

The symbols are all traditional but polished to within an inch of their lives and include red sevens, bells, bunches of grapes, oranges, strawberries, plums and cherries.

There are no wilds in this game but the ‘W’, ‘I’ and ‘N’ symbols appear on reels one, two and three respectively.

This is the bit we’re all aiming for and it’s triggered by landing the letters ‘W’, ‘I’ and ‘N’ on an active payline on reels one, two and three in the same spin; you will now receive one free respin with the win multiplier increased by 1x and a guaranteed outcome of either another letters in or a fruit combo win.

Another win with the letters increases the multiplier again and awards another spin while a fruit win pays out and ends the round. If the round is triggered with more than one ‘W’, ‘I’, ‘N’ combo you will receive that number of free spins.

Win Sprint is a sophisticated-looking slot machine with some tasty fruit and a clever bonus feature which crops up regularly in our experience; it comes with an RTP of 95.25% and is certainly worth a look.