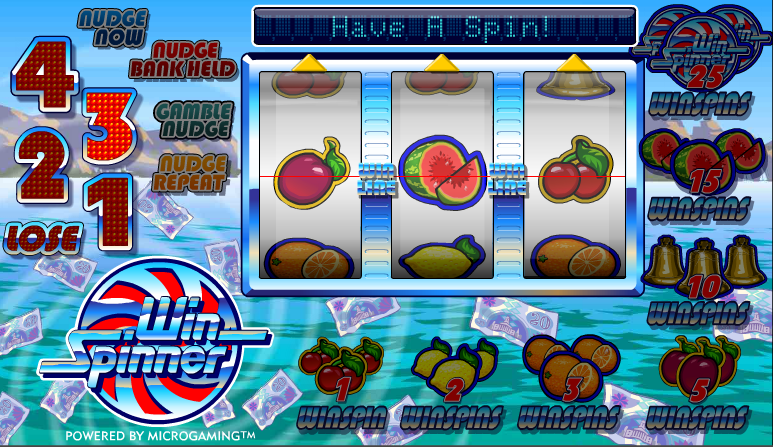 Fruit machine-style online slots are a little few and far between but Microgaming have a pretty decent range of these three reel games. It’s the nudges, holds and number trails which make them tempting for UK players and Win Spinner is another example which is pretty simple yet fun to play.

Win Spinner has three reels and just one payline in the base game and the theme is one of money, appropriately enough. Banknotes float around in the background in front of clear blue waters and a blue sky. The symbols are a traditional range of cherries, lemons, oranges, plums and the like but the big prize is won by landing three of the Win Spinner logos on the payline.

When you play this game you will quickly notice that there is no cash prize to be won in the base game; all your efforts are targeted towards making winning combinations which are then worth a certain number of Winspins. For example, matching three cherries will win you one Winspin while melons will win you fifteen.

Winspins take place on a separate reel with three paylines and different aspirational symbols such as champagne, fast cars and private jets. The spins start automatically and every spin will result in a win so obviously the more the better. Each win is a multiplier of your stake with three jackpot symbols worth 500x your wager.

Between one and four nudges are offered to the player occasionally and allow the player to jog down single reels to try and make winning combos. They may also be randomly repeated, gambled or banked until the next spin.

Holds are also randomly awarded and let the player freeze any or all of the reels to try and match symbols on the next spin.

When you see ‘Shifta’ in the little sign above the reels, they will rearrange themselves into a guaranteed win.

When you see this in the sign, don’t be tempted to use the holds – just press spin for a guaranteed win.

This is one of the more basic of Microgaming’s fruit machine slots but it has enough features to keep things interesting. Wins come around fairly regularly so the feature is triggered quite often.