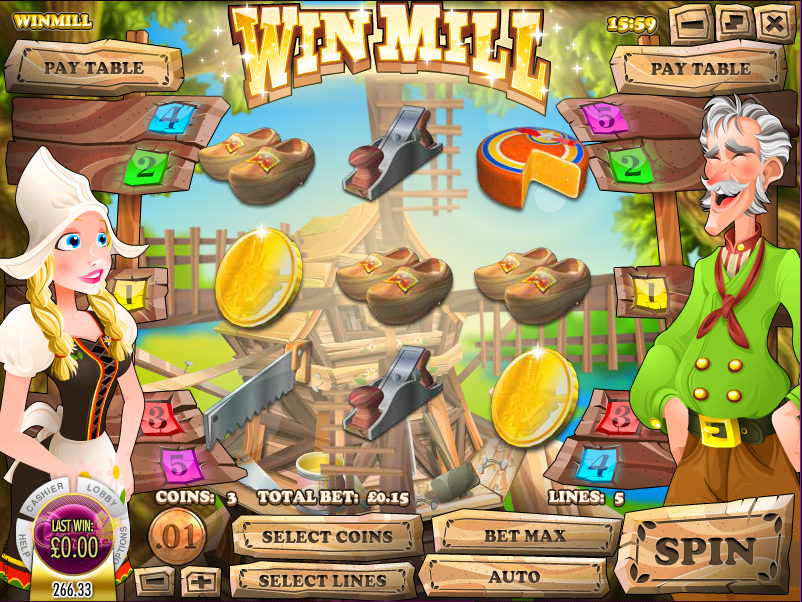 The world of the online slot features many a bad pun and that’s good news as far as we’re concerned; Win Mill is just one more addition to the long list of games who’s name has been mangled until it’s almost unrecognisable. This is a windmill-themed game from Rival Gaming and that theme becomes obvious if you watch the intro movie which features a Dutch chap sticking the sails on a building to create the  aforementioned structure.

Win Mill is a three reel, five payline game but when you first load it up it can be a little unclear as to what’s going on. There’s a windmill rotating in the background which seems to obscure the symbols somewhat and we found it a bit tough to get used to.

It all looks very nice though, the graphics are certainly of a high quality and the reels themselves are framed by the miller and his wife on either side. Those reels don’t spin in the normal way, they move as if in a washing machine before coming to rest.

The symbols are all Dutch or carpentry related and include clogs, a saw a plane and an Edam cheese; tulips are the highest value and worth 5000x your line stake for three on a winning payline. The gold coin is a bonus symbols which triggers the feature.

This feature is triggered by landing three of the gold coins on an active payline and you will then be taken to a screen displaying a windmill. Coins will fly out of this building and your task is to catch them. The more you catch, the bigger the prize. This feature seems to be tough to achieve.

This is randomly triggered and the girl will appear with two closed hands; she is hiding the coin in one and it’s your job to guess the correct one for a prize.

Play with three coins if you can afford it – the stakes are multiplied by 3x but the top prize is multiplied by 5x so the incentive is there. The minimum three coin bet is a fairly low £0.15.

Win Mill certainly looks good but we think that if there’s going to be a bonus feature it should be a little easier to trigger. That it doesn’t means we’re not quite as keen on this slot as we otherwise would be.