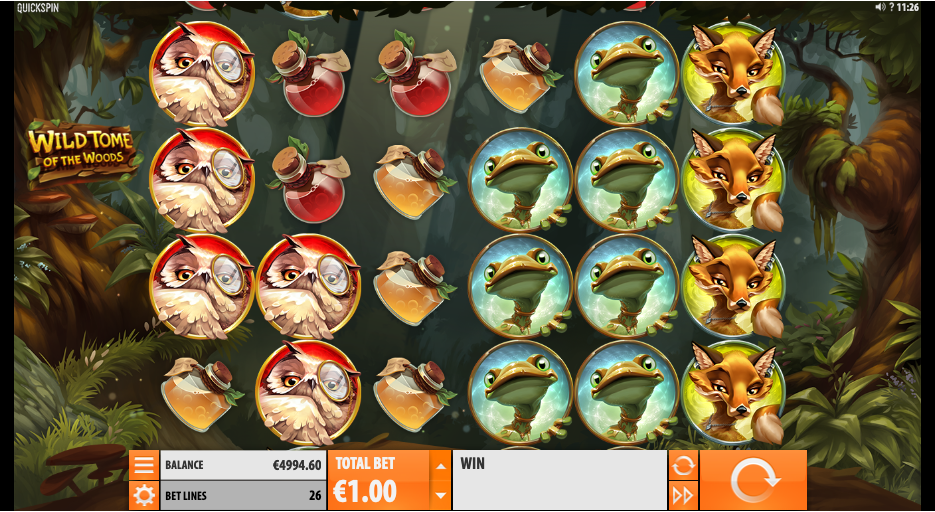 In the world of online slots is rare to find a patch of woodland which isn’t magical in some way and here we have another fantasy forest in which to sit back, relax and have a few spins; it’s called Wild Tome of the Woods, it’s developed by Quickspin Gaming and the title refers to a mysterious book which has the capacity to award bonus features whenever it appears.

Wild Tome of the Woods is a six reel slot with four rows and twenty six paylines; there’s a gentle soundtrack to the reel spinning action which takes place against a backdrop thick with undergrowth and tiny objects drifting in the rare light.

The symbols are all related to the theme and include the owl, the fox, the lizard and three vials of liquid in red, yellow and green.

The wild symbol is a golden ‘Wild’ which will replace all standard symbols to help form winning combinations. The Wild Tome is the special symbol which activates the sole feature.

This is where the fun starts and it’s triggered each time a Wild Tome symbol appears anywhere on the reels; the Tome will transform into one of the standard and then each instance of that symbol in view will change into a wild for (hopefully) a solid win. If you’re really lucky the final change will reveal another Tome and the process will continue – it’s possible to fill the reels with wild symbols this way for a maximum win of 1000x the total stake.

Wild Tome of the Woods just goes to prove that a free spins feature isn’t always necessary to create a compelling and enjoyable slot; it’s a really playable game with some cute graphics and a clever feature.