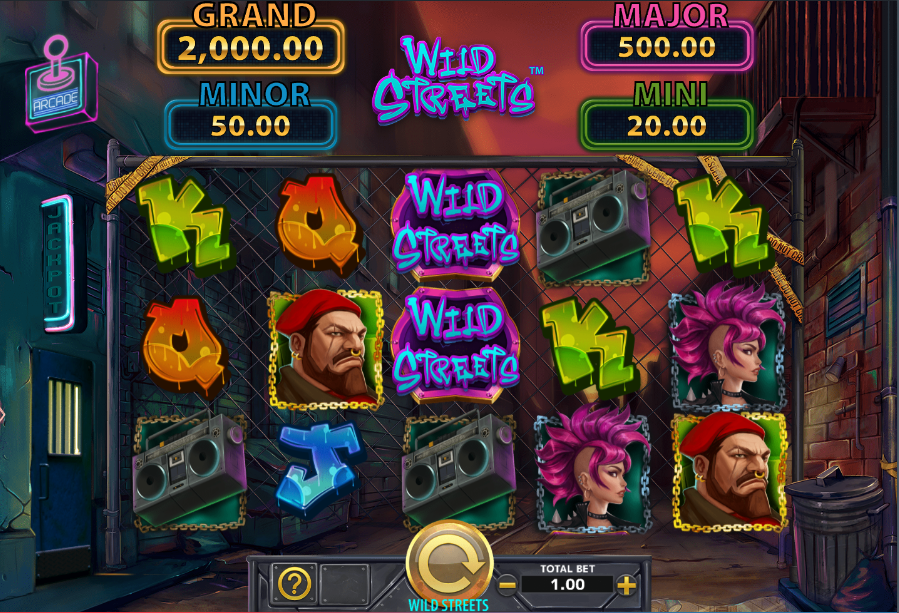 Let’s take a trip back in time to the 1980s and visit the type of city Charles Bronson would have cleaned up in no time at all; Wild Streets is the name of this online slot and it’s a feature-packed release from Red7 with free spins and graffiti in equally generous quantities.

Wild Streets is a five reel slot with three rows and twenty fixed paylines; it’s the first time we’ve seen reels spin on a chain link fence down a grubby back alley but that’s what’s happening here – the neon lights of an arcade provide some respite from the gloom on the left hand side.

The higher value symbols include the Wild Streets logo. the chap with the red beret, the girl with the purple mohican and the ghetto blaster; J, Q, K and A in graffiti style make up the lower values.

The wild is written in graffiti on a wall and it will replace all others to help make winning combos except for the bonus and cash register symbols.

There are three mini-features which can be activated in the base game:

This is triggered by landing three of the bonus symbols anywhere on reels one, three and five; one of the following features will now selected at random for you:

When the feature is first chosen you’ll have the chance to gamble it for a better one – but you may end up with a worse one so take care.

Wild Streets is a slot which packs about as many features into its reels as possible so once you get to grips with what’s going on it’s very entertaining; the music is contemporary 80s style to match the graphics and design and there’s an RTP of 95.90%.