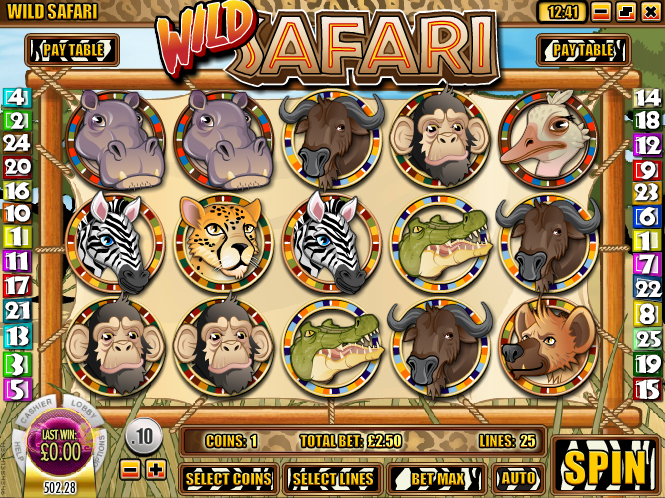 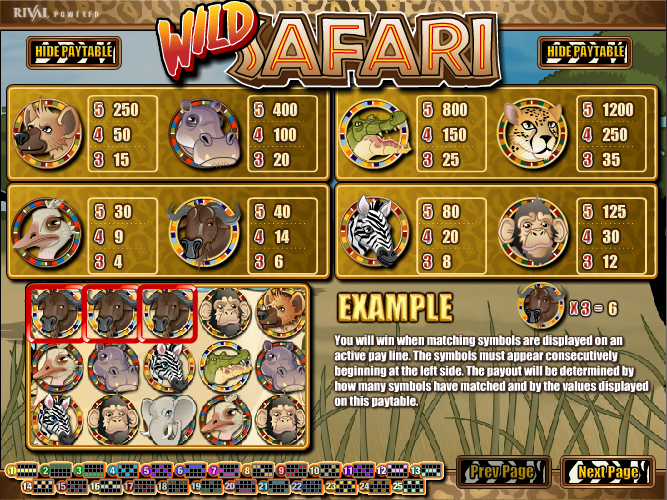 The open plains and savannahs of the African continent are out destination as we check out this safari-themed online slot from Rival Gaming. It’s called Wild Safari and it’s part of Rival’s i-Slots range of games which aim to provide the player with a more immersive slots experience. Read on to find out more about this release.

Wild Safari is a five reel and twenty payline game set in those vast grassy plains and all the symbols are unsurprisingly of an animal nature. They all look quite cute and not at all fierce and they include a monkey, an ostrich, a wildebeest, a zebra, a hyena, a hippopotamus, an alligator and a leopard. The elephant is the most valuable basic symbol.

The wild symbol is a giraffe and it’s also an expanding wild which means it will stretch to fill up all positions on the reels if it can complete a winning combo. The rhinoceros and the lion are both scatter symbols which trigger their own bonus features.

A range of free spins will be yours if you can land three or more of the rhino scatter symbols anywhere on the reels. The number you will receive are as follows:

Any wins earned during this stage will be subject to a 3x multiplier.

Three or more of the lion scatter symbols anywhere on the reels will trigger the main feature and it involves some player interactivity. As you can see from the video above you will first have to pick an location and then you must try and guide the camera to take a picture of the animals there. Some of the animals remain in place while others come and go so it can be a bit tricky. You will get five attempts to photo four animals.

The more animals you snap, the more you will win.

Repeated playing of the Safari Bonus Game will mean that you get to know where the animals will pop up; this should enable you to snap all four animals with no problems.

This is a cheerful and colourful game with perhaps not as many animal noises as you might expect. It looks good though and the two bonus features should keep most players busy.