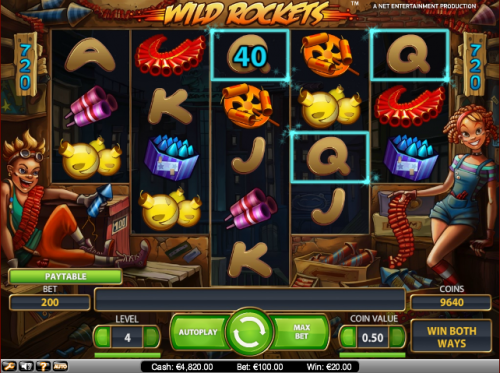 Wild Rockets is one of Net Entertainment‘s latest releases and refreshingly it offers something a little different from the standard machine of which more later.  It’s a fireworks themed online slot with a really impressive backdrop and some nice graphics which looks just different enough from regular slots to attract your attention.

You can see by the screenshot above that it’s not the usual twenty five payline offering; it still has five reels but they’re arranged in an inverted triangle; reels one and five have three symbols, two and four have four symbols while the centre reel has five symbols.  What this adds up to is a slot machine which doesn’t award wins based on paylines but on symbols appearing anywhere on the reels.  The ‘720 bets’ logo on the screen refers to the 720 possible ways to win with each spin.  So you need to land three matching symbols anywhere on the reels to win some money.

The symbols are some nicely drawn fireworks as well as the normal 10, J, Q, K and A; we have an orange Catherine Wheel, red Chinese firecrackers, purple rockets, a blue cake-style firework and some yellow bombs.  The wild symbol is some rockets which change into a……wild symbol while the scatter symbol is a box of fireworks.

The wild symbol has a funky extra feature which works as follows: the rockets on the wild symbol point either up or down and when the symbol lands the rockets fire in the direction they’re pointing.  If they travel over other symbols then those symbols will also become wild.  Not too shabby!

Scatter symbols can appear on any reel and drawing three will get you ten free spins, four scatters will get you twenty spins and five will earn you fifty spins.  More free spins can be won within the free spin bonus game and it looks like a lucrative way to spend some time.

Wild Rockets by necessity is a game which offers left to right and right to left winning combinations and we give it a big thumbs up.  Perhaps the only downside is that because of the random placing of winning combinations, the game will spot the winning spins before you but that’s a minor complaint. Minimum bets are £0.50 per spin with a maximum of £100 for the big spenders.