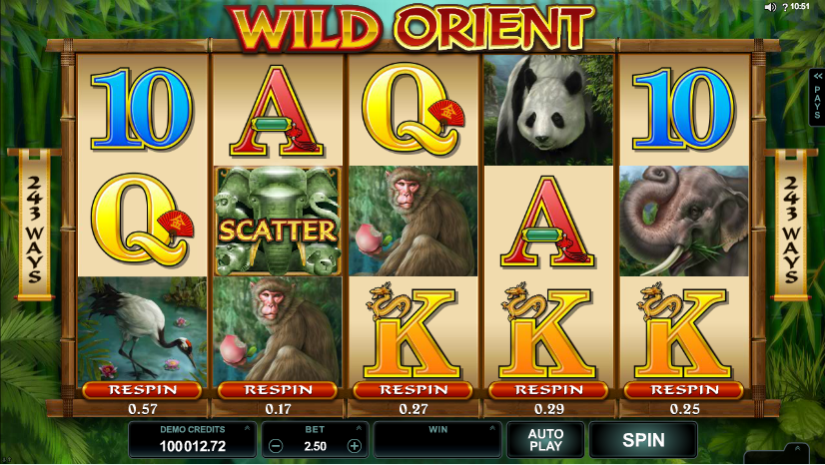 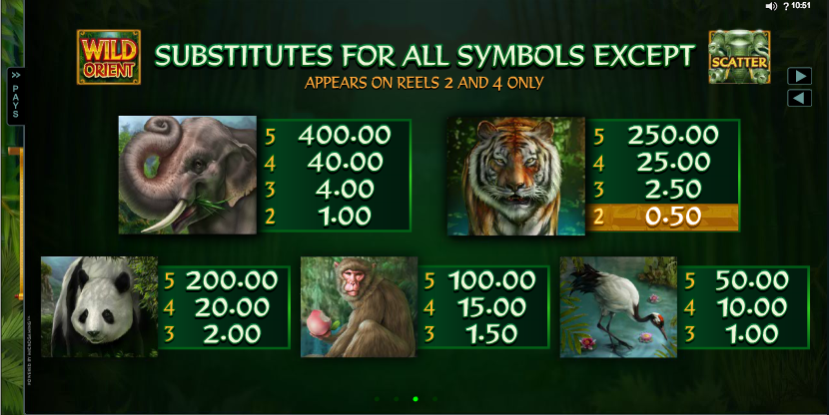 Brand new from Microgaming is this dual-themed online slot called Wild Orient; it’s based on the subjects of the Far East and animals and it features the wild creatures which occupy that part of the world. As slots fans both subjects are of course familiar but this game also offers a free spins round and the ability to respin any single reel after a spin.

Wild Orient is a five reel slot with 243 ways to win; the standard payline structure is replaced by a system in which winning combos can be formed as long as there are matching symbols in adjacent reels starting from the left hand side. There’s some typically Chinese music to accompany your gameplay and the reels spin in a bamboo frame in front of steamy forest.

A range of animals represent the high value symbols including an elephant, a tiger, a panda, a monkey and a wading bird of some sort; 9, 10, J, Q, K and A make up the lower values.

The Wild Orient logo is obviously wild, it appears only on reels two and four and will replace all other symbols except the scatter – that’s a stone carving of the animals and it activates the main feature.

The spins can be retriggered by landing three more scatters anywhere in view.

This is a feature we always find interesting and after each spin (it won’t work in Autoplay) you have the chance to respin any single reel in the hope of landing a symbol which will form a winning combo. The cost of the spin reflects the likelihood of landing a particular win and you can keep trying as long as you want.

Wild orient is something of a regulation slot from Microgaming but it is enhanced by the reel respin feature and some nice graphics. Give it a go if these themes are some of your favourites.