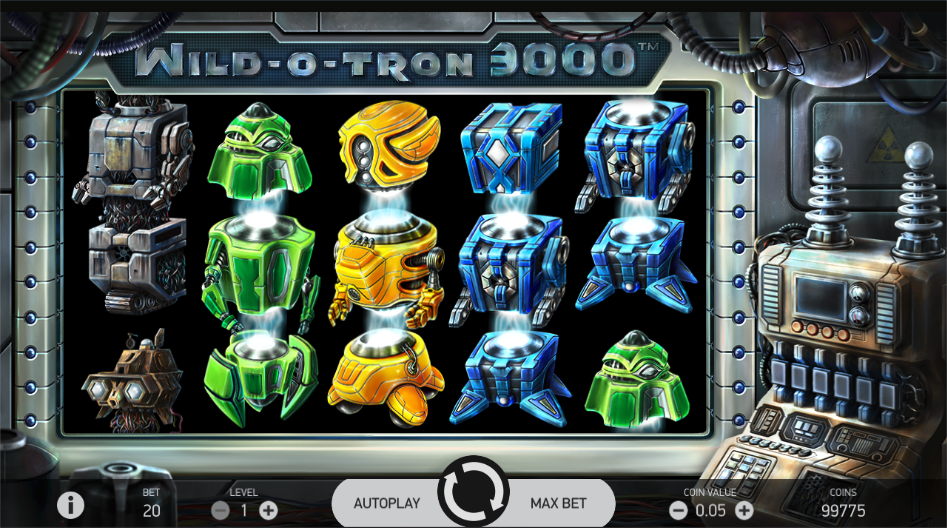 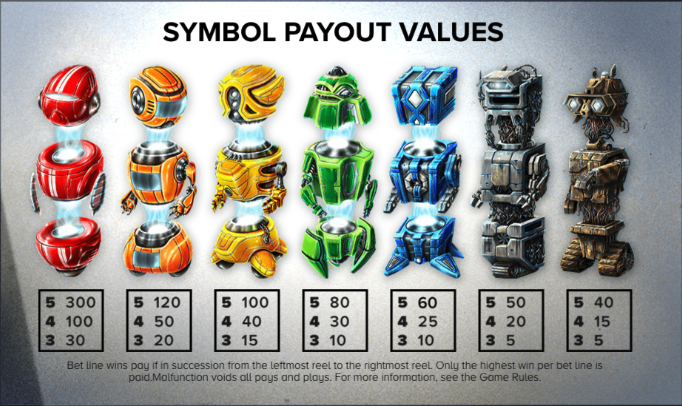 Robots are the key to this science fiction-themed online slot from Net Entertainment; it’s called Wild-O-Tron 3000 and it’s simple gameplay hides a bonus feature which should result in some big wins through a clever wild feature.

Wild-O-Tron 3000 is a five reel slot with three rows and twenty fixed paylines; the reel-spinning action takes place on screen surrounded by industrial design while the Wild-O-Tron itself looks on from the right hand side.

There are just seven standard symbols and they’re all robots in red, orange, yellow, green. blue, grey and a sort of grubby gold; they always appear three sections/positions high on the reels but of course you may see, for example, the bottom section of one and the two top sections of another on a particular reel.

There’s no bonus symbol in Wild-O-Tron 3000 but the wild is represented by a metallic, silver ball with a glowing ‘W’ on the front; it will replace all others to help form winning combinations.

This is the only bonus feature and it can occur on any spin in the base game; the Wild-O-Tron will spark into life and transform all instances of up to six robots wild to help you out with some tasty robot wins. Obviously the more robots that become wild the better and if you look closely at the Wild-O-Tron on the right you’ll see that the lights below the small screen light up to indicate with robots will transform into wilds.

Wild-O-Tron 3000 is another very playable slot from Net Entertainment which dispenses with the usual bonus trigger and gives us a smooth gaming experience with no interuptions. There’s no real music, just an electronic soundtrack to accompany your gameplay.