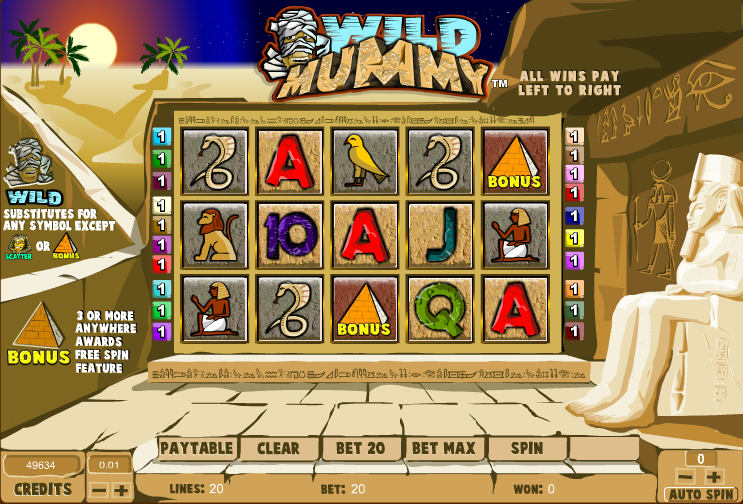 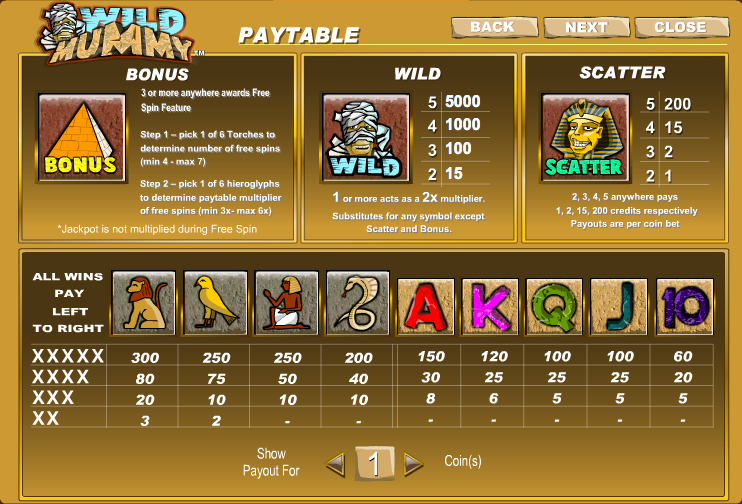 It’s not uncommon for us online slots fans to make regular journeys to Ancient Egypt; pretty much every developer has released something with an Egyptian theme and this ones from Amaya Gaming. It’s called Wild Mummy and while it’s fairly similar to some of those competing games, it’s got a cartoonish feel which cheers things up a bit.

Wild Mummy plays out over five reels and twenty paylines and the backdrop to this game is the entrance to a tomb, guarded by a seated Pharaoh. In the distance the sun is setting behind the sand and the palm trees.

10, J, Q, K and A make up the lower value symbols while the higher value, theme-related ones are four hieroglyphs – a snake. a servant, a bird and a lion.

The scatter is a grinning Sphinx’s head, the wild is of course the Mummy and then there’s a pyramid bonus symbol which is the key to the main feature.

The Mummy is the highest value symbol, worth 5000x your line stake for five on an active payline but if it helps form a winning combo it will double that payout.

The Pyramid is also a scatter symbol and if you can land three or more of them anywhere on the reels you will trigger this feature.

First you will be shown six torches and must pick one to determine the number of free spins (4 – 7), then you must pick one of six hieroglyphs to give you a multiplier (3x – 6x).

If you like some creativity in your sound effects then hit the mute button quickly – there’s nothing attractive about the noises here.

This is a slightly dated slot now and it shows a bit – the graphics and animations are clunky and the sound effects are basic. You certainly get what it says on the tin but that’s probably not enough for players used to something a bit more sophisticated.