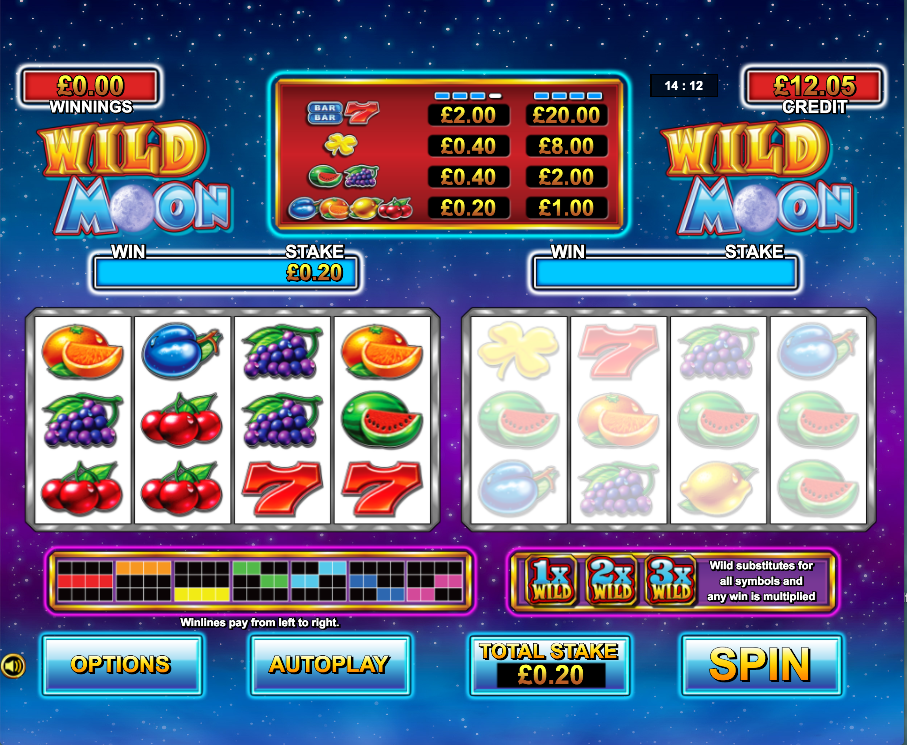 There’s a lunar theme to this colourful online slot machine from Gameiom but it also has a fruity side which should prove popular for those who prefer something a little more traditional; anyway it’s called Wild Moon and it has any interesting layout about which you can read more below.

Wild Moon is a four reel slot with three rows and seven fixed paylines but as you can see from the screenshot above there are two sets of reels which operate independently of each other, doubling the number of paylines available should you choose to use both. Click on the ‘Total Stake’ button below the reels and you’ll be able to choose how many reel sets to use (as well as change the stake).

As already mentioned there are plenty of familiar, fruity symbols and these include plums, oranges, lemons, cherries, watermelons and a bunch of grapes; more valuable symbols are the golden four leaf clover, the blue double bar and the red seven. The latter two are the most valuable and worth 20x your stake for four on an active payline.

The wild symbols can be worth 1x, 2x or 3x any win to which they contribute and they will substitute for all others to help form winning combinations

That’s about all there is to Wild Moon, there are no bonus features unless you count the ability to use one or two reel sets.

Wild Moon offers a little more than the traditional slot with it’s two reel sets and four reels on each; if this looks like your sort of thing thing then give it a go – it comes with an RTP of 96.00%.