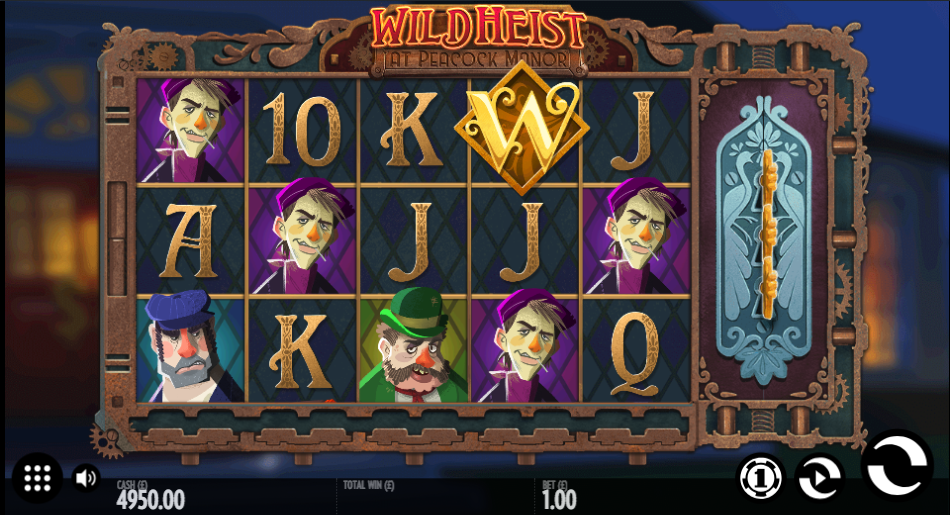 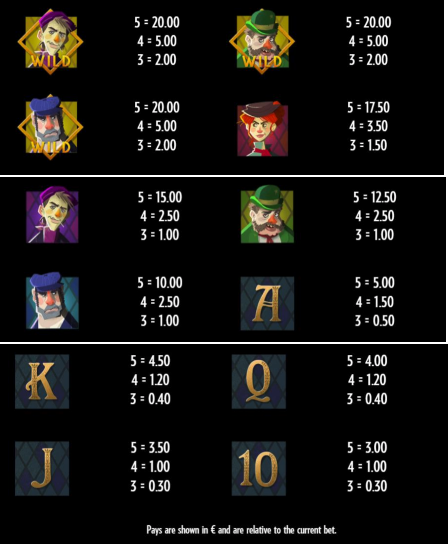 Quick! Call the police! There’s been a robbery at the posh house down the road and now it’s your task to solve the mystery of the Wild Heist at Peacock Manor; this online slot is brought to you by Thunderkick and it comes with a Cluedo-like bonus game along with some free spins.

Wild Heist at Peacock Manor is a five reel slot with three rows and seventeen fixed paylines; those reels spin on quite a complex piece of machinery while some contemporary music accompanies your gameplay. The sixth reel contains three locks and we’ll explain this shortly.

The higher value symbols include a golden peacock (which is three positions tall) and four suspicious-looking characters – although the chap in green could be a copper; 10, J, Q, K and A make up the lower values.

The big’ gold ‘W’ is wild and it will replace all others to help form winning combos except for the golden key scatter symbol.

This is triggered by landing three or more of the golden key scatter symbols anywhere in view and you will initially be asked to pick three, four or five cards depending on whether the round was triggered with three, four or five keys. As the keys land in the base game the locks on the sixth reel will unlock.

Those cards will reveal enhancements for the seven free spins which include win multipliers, extra free spin, the Mystery Feature or one of the characters becoming an extra wild. During the spins, landing at least two keys will award further card picks for the remaining spins.

This can occur at random in the base game or via a card in the free spins:

Wild Heist is a very high quality game with a bonus feature which is a little tricky to trigger but pretty lucrative when you manage it; we like the fact that the Mystery Features hit quite regularly in the base game and this slot comes with an RTP of 96.10%.