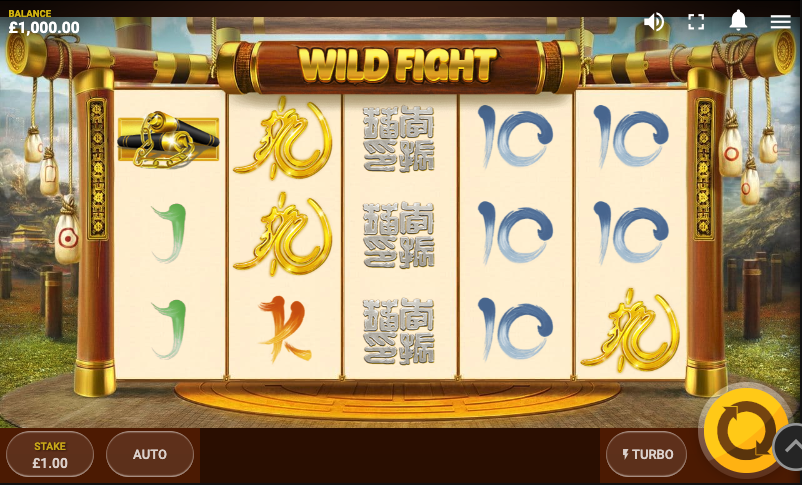 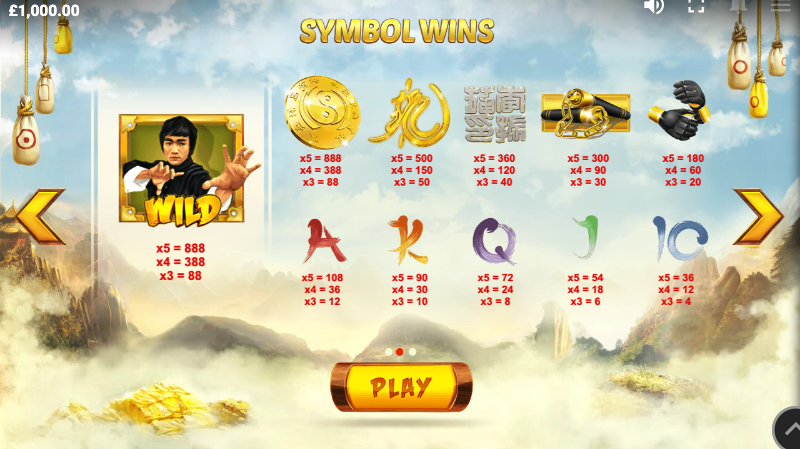 The name Bruce Lee is not mentioned as you spin the reels in Wild Fight but this online slot machine from Red Tiger Gaming clearly has the great man in mind; it offers players random wilds, free spins and an instant cash prize.

Wild Fight is a five reel slot with three rows and twenty fixed paylines; those reels spin on a wooden training structure with heavy bags hanging on the eight and left hand sides. The backdrop is a vision of rural China with mountains and temples reaching up to the sky.

The five high value symbols include gold coins, a Chinese character, a black of writing, a pair of nunchucks and some gloves; 10, J, Q, K and A represent the lower values.

The martial artist (Bruce) is wild and he’ll replace all other standard symbols to help form winning combos; the Free Spins dragon is the bonus symbol. The wild symbols smash their way through the reels rather than spin into view.

The Tiger Eyes can randomly appear on top of the reels to award an instant win or trigger the free spins round.

This is triggered by landing three Free Spins symbols anywhere on reels one, three and five and initially you’ll be prompted to kick the heavy bag several times to reveal the number of free spins awarded. This kicking can occur again during the round to award more spins (as you can see in the gameplay video above). Any wild symbols will freeze in place until the round ends which should result in some big wins.

Landing the big, red ‘Win’ symbol on reel three will pay out up to 888x your total stake.

Wild Fight is one of favourites Red Tiger slots and it’s packed with action, excitement and bonus features and some big prizes in the free spins round – highly recommended.