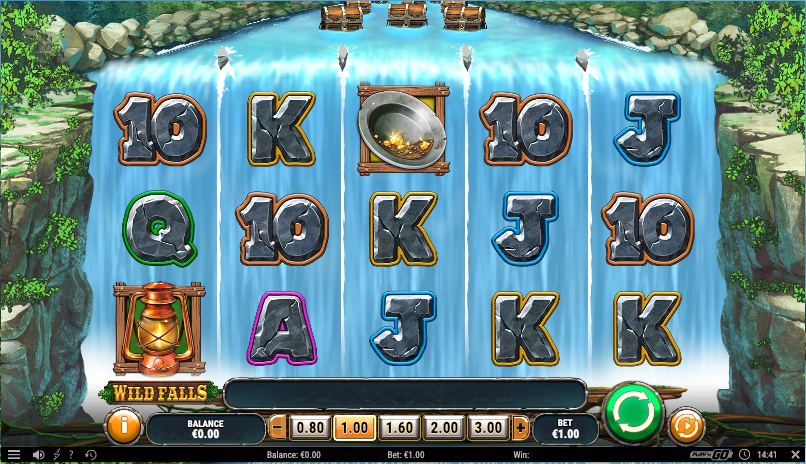 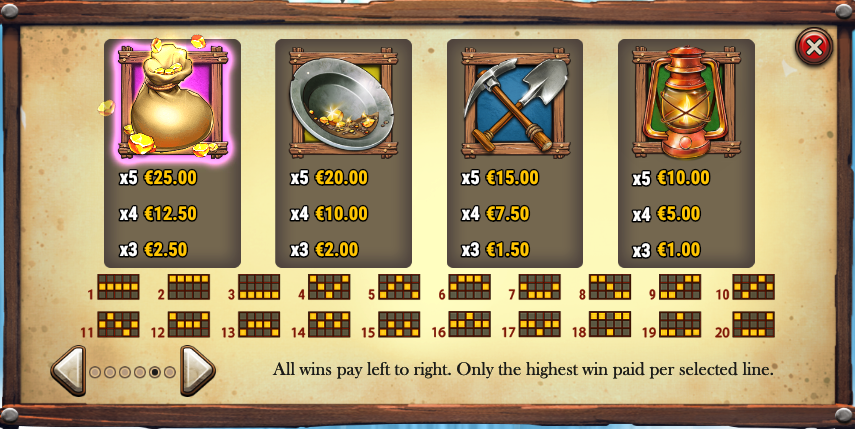 Mining for gems and precious metals is a common theme of online slot machines but panning for gold is certainly less so; Play N Go are looking to level the playing field a little here with Wild Falls, a game in which the waterfall provides wild symbols and free spins.

Wild Falls is a five reel slot with three rows and twenty fixed paylines; the symbols spin on the waterfall but river rushing in from behind provides the wild and scatter chests on each spin. There’s a twangy, gold rush soundtrack to accompany your gameplay.

The more valuable symbols include a bag of gold, a panning dish, some tools and a lantern; 10, J, Q, K and A represent the lower values.

The chests are both wild and scatter symbols and they float onto reels two, three and four from the river in the background; they’ll replace all others to help form winning combos but they’re also integral to the features outlined below.

This can occur when just one or two chests are present on the reels – they will stick in place and you’ll get one free respin.

This can occur during any base game spin and the chests become gold with multipliers attached which are applied to any wins they are part of; those multipliers can be 2x, 3x and 5x and more than one in a combo will be multiplied together.

This is triggered when three chests float onto reels two, three and four; chests will move down one position on each spin while there’s always the chance more will fall in from above – the spins will continue until there are no more chests on the reels.

If the spins are triggered during the Gold Rush feature then the Super River Of Gold free spins are active in which each chest will also come with a multiplier value.

Wild Falls offers something a bit different in the way it adds wilds to the reels and the way in which the free spins play out – it’s plenty of fun and an enjoyable addition to the mining genre.