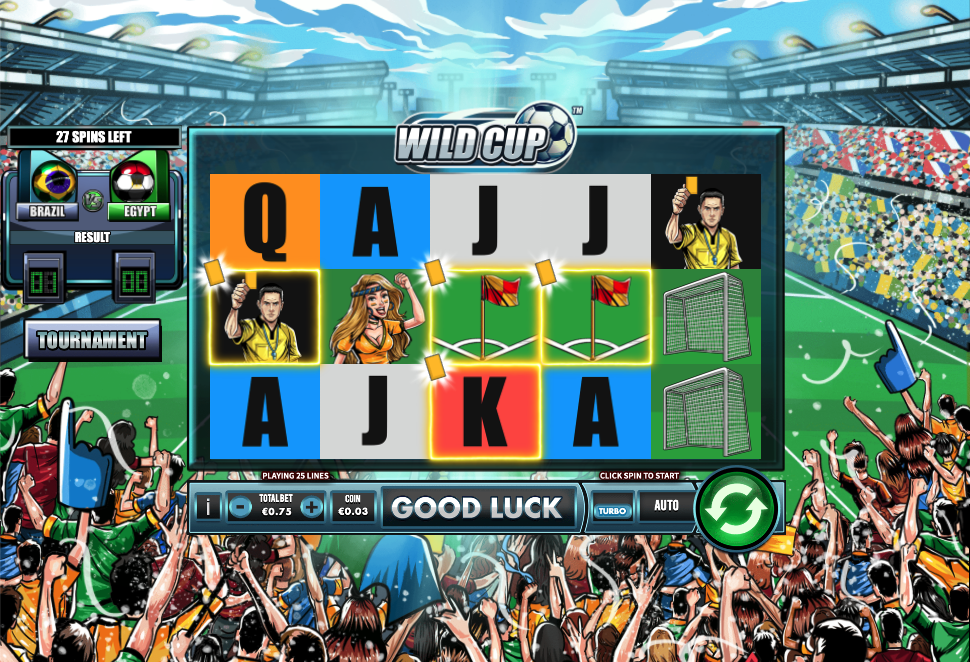 Hear the roar of the crowd as the players step out onto the pitch in this footie-themed online slot from Skywind – it’s called Wild Cup and alongside picking a team to follow it tempts players with free spins and a wild feature based on yellow cards.

Wild Cup is a five reel slot with three rows and twenty five fixed paylines; all the action takes place in a gigantic stadium packed with fans wearing shirts of all colours and the occasional giant foam finger.

High value symbols include the legs of two players, the card-wielding ref, the female fan, the penalty and the corner flag; J, Q, K and A make up the lower values. The tackle is wild and it will replace all standard symbols to help create winning matches. The ball and the goal are the special symbols.

This occurs whenever a referee lands next to one of the players legs symbols; a yellow card will now be attached to that position until the next time the legs land next there next to the ref at which point the disgruntled player will turn into a wild symbol.

If two refs land next to the legs on the same spin then that player will turn wild instantly.

Landing the legs on reel one, the ball on an adjacent position on reel two and at least one goal on reel five; pick one go the goals to reveal one of the following features:

Each set of thirty spins comprises one match and before those spins you’ll be asked to pick the winning team (or a draw); during the spins the scoreboard keeps track of the result and if you’re correct when the spins end you’ll win an extra cash prize.

Football-theme slots aren’t particularly hard to come by but Wild Cup pushes the boundaries a bit with the addition of some clever, integrated bonus features and an ongoing competition which makes you want to stick around. The RTP of 94.38% is a little low though.