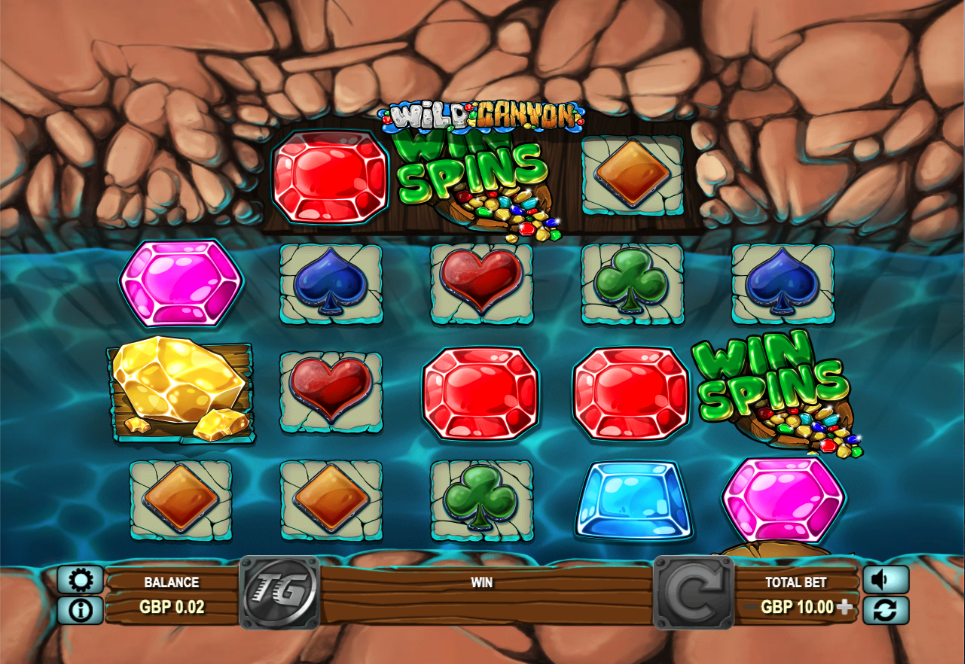 Panning for gold and mining for gems have provided the themes for number of enjoyable online slots so we’re pleased to bring news of Wild Canyon, a release from Touchstone Games which offers players free spins, WildMakers and the Flash Flood feature.

Wild Canyon is a five reel slot with three rows and five hundred and seventy six ways to win; we are looking down on the reels from above which float in the canyon where our elderly prospector is hoping to find some gold. Just above are three reel positions which contain the WildMakers which we shall explain shortly.

The higher value symbols include the prospector, a gleaming gold nugget and gems in red, purple and blue; playing card symbols in red, orange, blue and green make up the lower values.

The Win Spins symbol is the one which activates the main feature.

There are no wild symbols appearing naturally on the reels but any symbols which match the ones above reels two, three and four will transform into wilds which will then substitute for all standard symbols.

On any spin the Flash Flood may occur and wash away all losing symbols, replacing them with winning ones; this can occur up to four times on one spin.

Landing three of the Win Spins bonus symbols on reels one, three and five will trigger the free spins and you’ll first get the chance to pick one of those symbols to reveal 5, 7 or 9 spins. With each spin the multiplier for any wins increases by 1x – the feature can be retriggered meaning that there’s a maximum of a 99x multiplier for the luckiest players.

Lucky Gems is still probably our favourite Touchstone slot but Wild Canyon offers some cheerful graphics and a couple of interesting features we’ve not seen before – chuck in some free spins and you’ve got an entertaining game.