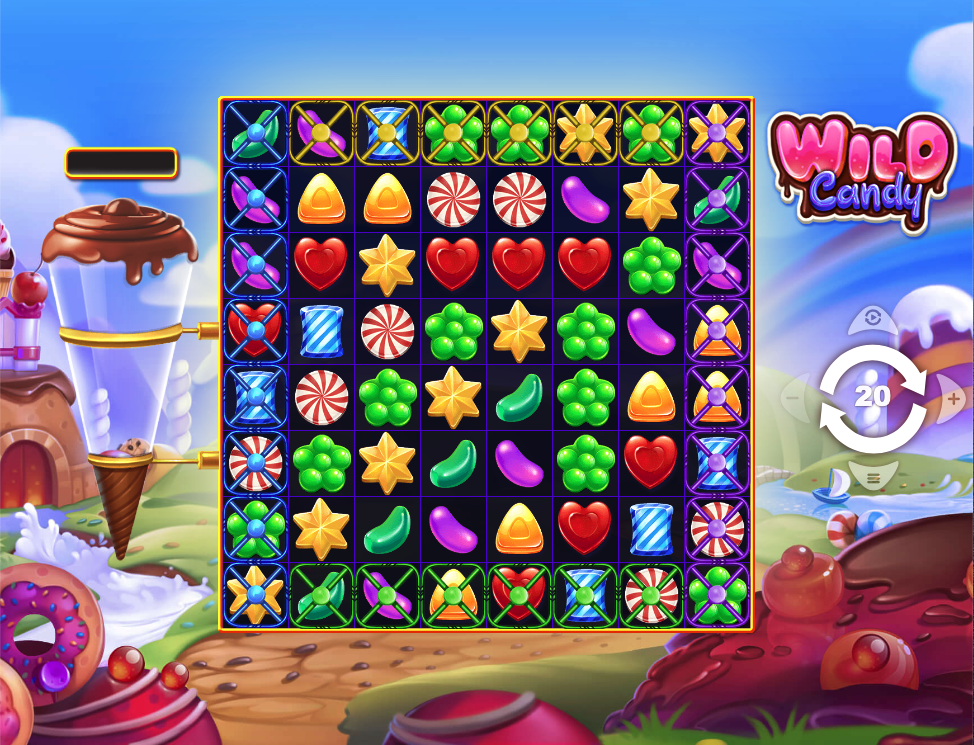 Somewhere in a better universe there’s a landscape formed entirely from tasty treats and assorted sweets and it’s here that all the action in Wild Candy takes place; this online slot from Pariplay is really more of an arcade game with wins formed from clusters, an expanding playing area and some free spins to top it all off.

Wild Candy plays out on the 8×8 grid you can see above as if floats against a backdrop of sweets, cakes and ice cream; wins are formed by matching at least four matching symbols horizontally and/or vertically. Notice also that the outer symbols are locked in place to begin with and we’ll explain that feature a bit further down.

The eight standard symbols are all candies and sweets of different shapes and colours; wild symbols replace all others and each comes with a countdown number – that’s the number of wins it will remain in place for.

Any candy in a winning combo will disappear and be replaced by more falling in from above – more wins can then be formed to continue this process. The Tumbles also trigger one of the features because after each consecutive win the grid size increases as some of the locked areas are freed:

This is triggered after the seventh consecutive cluster win and you’ll receive eight free spins; if you can land another consecutive seven wins in this round an extra spin will be awarded – a maximum of two extra spins are available this way.

Wild Candy may not be a game for the slot purists but we love it – cluster wins, tumbling symbols, free spins, it’s all good. Just set the Autoplay and watch the sweet treats line up!