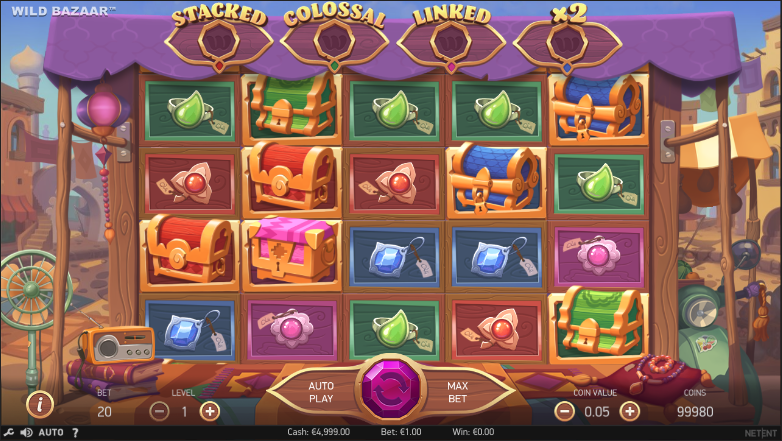 Fresh from the Net Entertainment online slots factory is this game based on a market stall in some dusty Middle Eastern location; it’s called Wild Bazaar and it’s the kind of place to buy some interesting curios, grab some shade from the desert sun and win some nice bonus features.

Wild Bazaar is a five reel slot with four rows and twenty six fixed paylines; all the action takes place under the purple awning of this particular vending zone and there’s a fan to keep you cool on the left hand side. Some appropriately delicate background music accompanies your gameplay.

The four higher value symbols are all treasure chests of different colours – red, green, pink and blue – while the lower values are represented by jewels in corresponding shades.

In the base game there are no wild or bonus symbols but there’s still plenty of wild action once the feature gets triggered.

This feature is triggered each time you land a winning combo which contains the higher value treasure chest symbols; the number of symbols in that combo is the number of free spins you’ll now receive while the colour of the chest determines which of the following wild features occur during those spins:

The particular wild feature(s) won will be shown above the reels and it’s possible to win more than one feature per round. It’s also possible to trigger a new round of wild spins by landing a treasure chest combo within the spins.

As with any Net Entertainment slot Wild Bazaar looks and sound great and it comes with a very clever feature which we may not have seen before; it does seem quite tricky to land winning treasure chest combos regularly but they can be lucrative when you do. There’s an RTP of 96.15%.