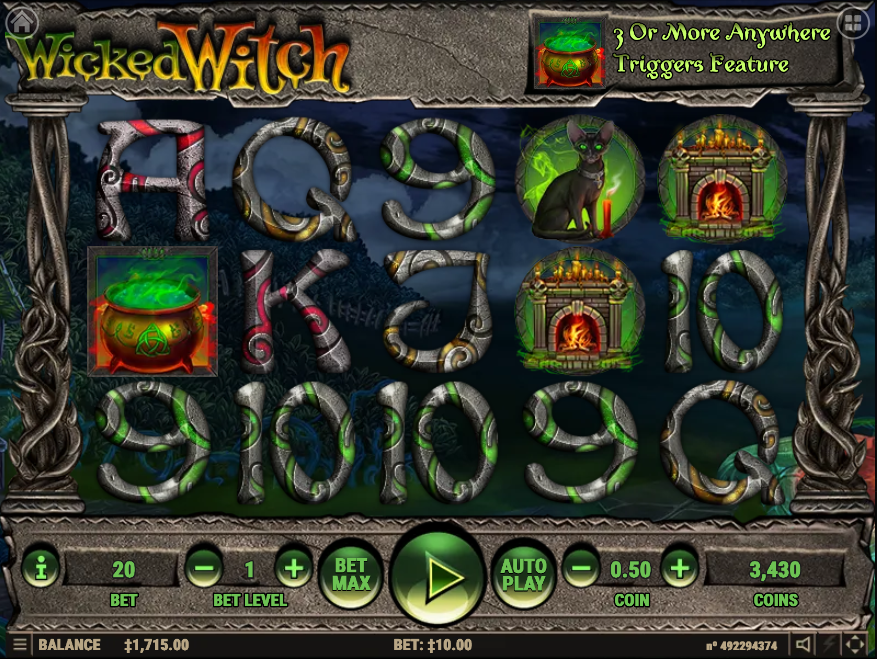 Whether it’s Halloween or not, witches are always a good source of inspiration for online slots developers and so we are pleased to bring you details of Wicked Witch, a game developed by Habanero Systems which offers players extra free spins for collecting spooky items.

Wicked Witch is a five reel slot with three rows and twenty fixed paylines; those reels spin on some sort of stone crypt behind which is a nighttime view of a house with green glowing windows.

The theme-related symbols include the balck cat, the fireplace, the witches’ broom and the spellbook; 9, 10, J, Q, K and A represent the lower values.

The scantily clad witch is wild and she’ll replace all standard symbols to help form winning combos; the smoking cauldron is the scatter symbol.

This is triggered by landing at least three of the smoking cauldron scatter symbols anywhere in view for which you’ll an initial six free spins; that might not seem to generous but there’s an extra feature here which can bump up those spins and wins so look out for one of the following symbols to land on the reels:

When one lands during the first six spins you’ll be awarded an extra six spins – if another lands during those spins then it’s another six and in total there are twenty four free spins available for the luckier players.

The cauldron doesn’t appear during this round so it’s not possible to win any more spins in that manner.

Wicked Witch creates a comical, spooky atmosphere which suits the theme really well and it spins the reels in a cartoon style which is pleasing to the eye; not surprisingly the bigger wins are found within the feature.