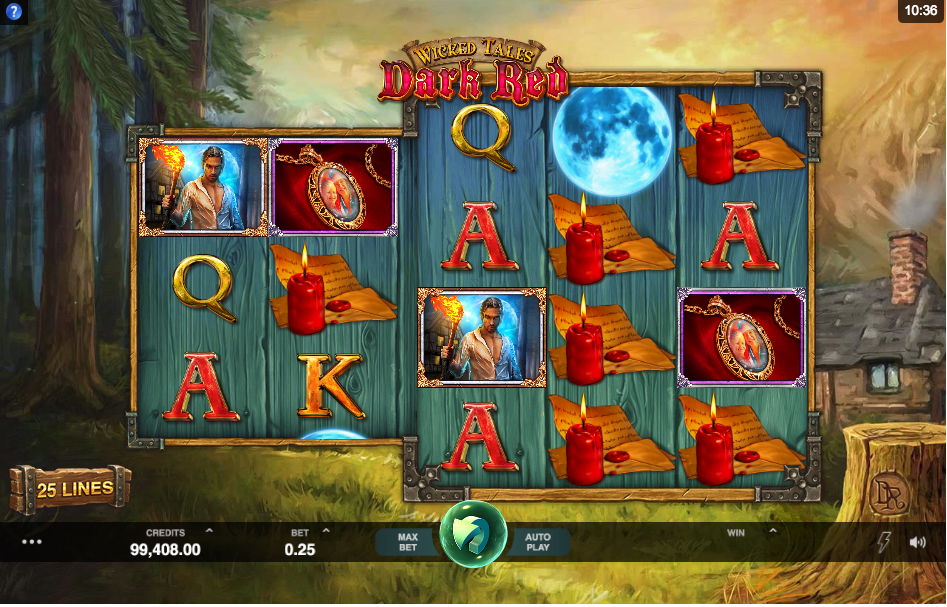 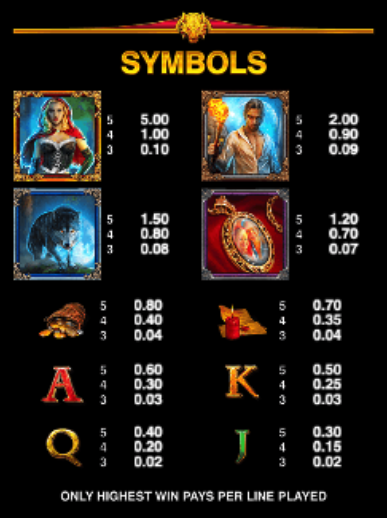 If you go down to the woods today then you may well bump into this fairytale-themed online slot based loosely on Little Red Riding Hood; it’s called Wicked Tales Dark Red, it’s developed by Microgaming/Triple Edge Studios and it comes with plenty of extra features.

Wicked Tales Dark Red is a five reel slot with three/four rows and twenty five fixed paylines; those oddly-shaped reels spin against a forested, mountainous  backdrop with a small house in a clearing. The section of the reel with four rows will move around the reels randomly, changing the payline pattern but not the number of paylines which always remains at twenty five.

The theme-related symbols here include the male and female characters from this story, the wolf, the brooch, the pouch of gold and the candle; J, Q, K and A make up the lower values. The four-row set of reels an aso contain large, 3×3 symbols.

The ‘Dark Red’ logo is wild and it will substitute for all others to help form winning combos except for the moon/Wheel of Fortune scatter symbol.

This is triggered by landing at least three of the moon scatter symbols anywhere in view; you’ll now get to spin the Wheel of Fortune which will reveal a cash prize and a feature – you keep spinning until a feature is eventually won. The two bonuses available are:

Wicked Tales Dark Red is a slot which adds a sinister twist to the original fairytale narrative – as a game it’s got plenty going for it with some clever features, classy graphics and an appropriately haunting soundtrack. It comes with an RTP of 96.10%.