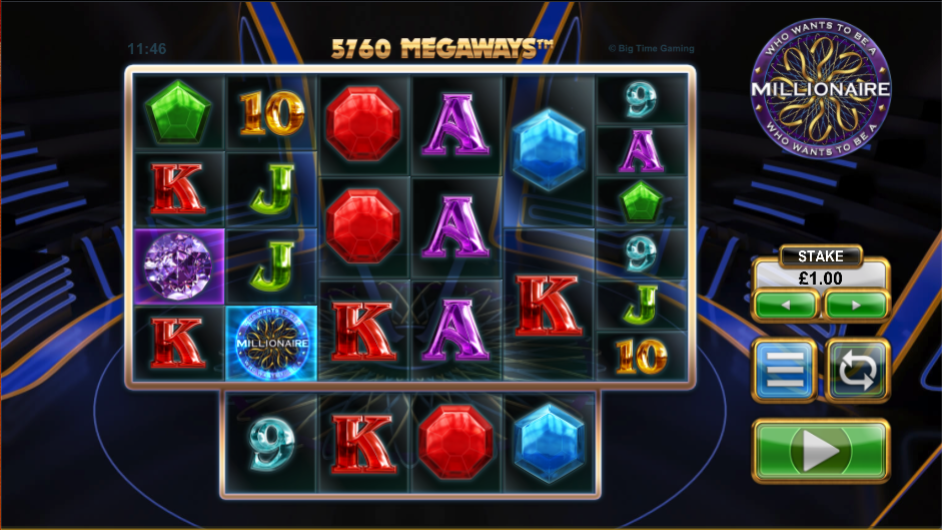 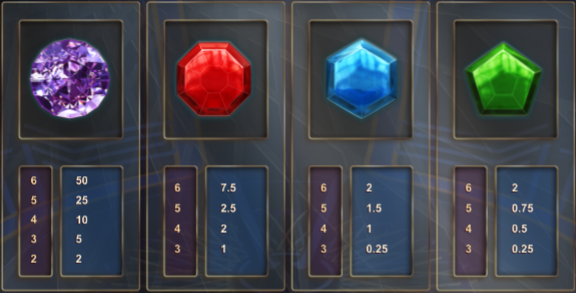 The big-paying TV quiz show returns to the reels once more in the shape of this inventive online slot machine from Big Time Gaming; it’s called Who Wants To Be A Millionaire Megaways and it offers collapsing reels along with a chance to play the original game.

Who Wants To Be A Millionaire Megaways is a six reel slot with four rows and up to 117649 ways to win – that number is possible because of the different size symbols and the extra row below the others. That row appears only under reels two to five and it moves symbols in from the right hand side.

Four gems in purple, red, blue and green represent the high value symbols while 9, 10, J, Q, K and A make up the lower values.

The wild is a multicolour question mark which appears only on the extra reel and it will replace all other symbols to help form winning matches except for the Millionaire logo scatter.

Always one of our favourite gameplay features, this sees any symbols in winning combos disappear to be replaced by more falling in from above – more wins can then be formed to continue the process.

This is triggered by landing three of the Millionaire logo scatter symbols anywhere in view; The number of scatters you land will determine which rung of the gamble ladder you start the next bit on (three scatters – rung one/eight spins, four scatters – rung two/ten spins, etc).

You don’t have to gamble but if you do you’ll be asked to pick A, B, C or D to move up the ladder and you’ll get the famous lifelines on each gamble to help out. Reaching rungs two or seven will guarantee 10 or 20 free spins respectively.

When the spins start the multiplier value for any wins is 1x but each reel collapse will increase it by 1x with no maximum value.

Scatter symbols appear only in the extra row during this round and three or four in view will award 4 and 8 extra spins respectively.

Millionaire is a slot which channels the look and the sound of the TV show very effectively and the collapsing reels always add a little bit of extra excitement. We found it quite hard to trigger the free spins but maybe we were just unlucky. The RTP is 96.27%.