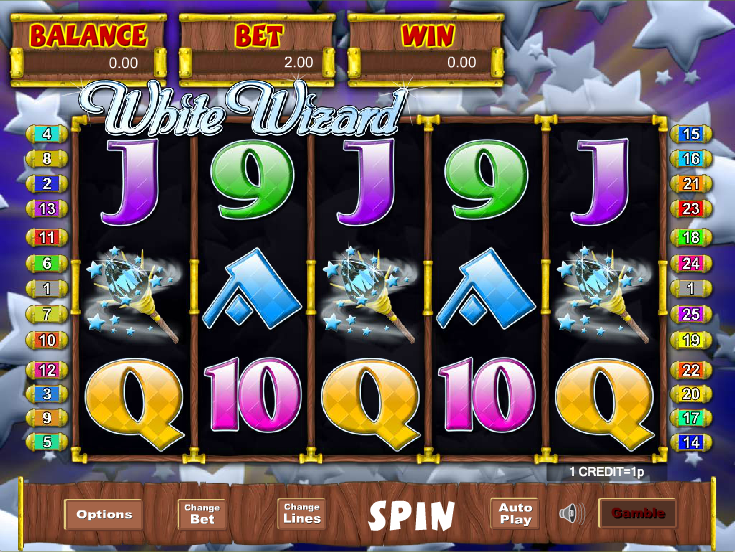 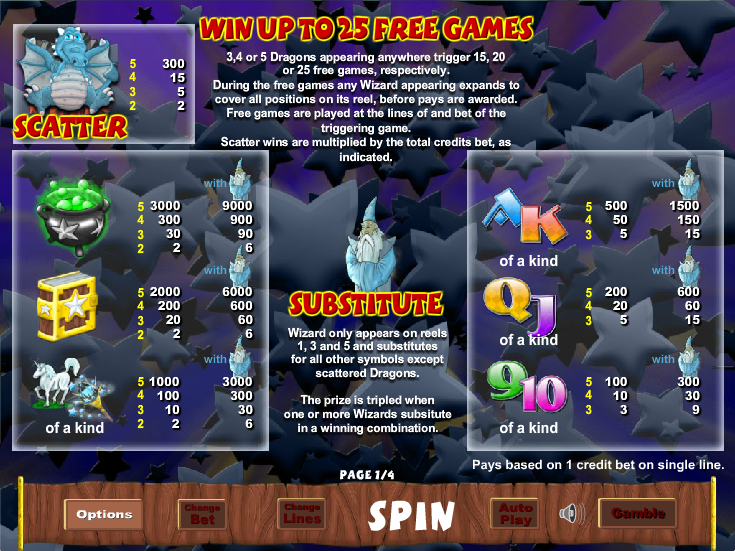 Spells, dragons and mandatory long white beards await those willing to take a chance on this online slot from Aristocrat Leisure; it’s called White Wizard – a term usually used to describe a ‘good’ rather than an ‘evil’ version of this elderly gentleman. The wizard himself makes several appearances in this game and he’s the key to the big wins; read the full review below for more information.

White Wizard is a five reel slot with three rows and up to twenty five paylines; it’s designed in the type of big and colourful way which is always pleasing to the eye and behind the wooden reels there’s an explosion of white stars to add some drama to the scene.

There are four high value symbols including a cauldron bubbling with some green mixture, a spell book, a unicorn and sparkling wand. 9, 10, J, Q, K and A make up the lower values.

The white wizard himself is the wild symbol and he appears only on reels one, three and five, substituting for everything except the scatter and multiplying any wins by 3x. That scatter is a chubby blue dragon and he activates the main feature.

This is triggered by landing three or more of the dragon scatter symbols anywhere in view for which you will receive the following:

During the spins the wizard is a bit more active and if he appears on the reels he will change that particular reel completely wild. Any wins are evaluated after this has occurred.

Any of your base game wins can be gambled by clicking the ‘Gamble’ button below the reels and here you will have the opportunity to double your win up to five times by correctly picking one of two choices.

White Wizard is enjoyable enough without offering anything particularly ground-breaking; the graphics and animations are nice and there’s a decent RTP of 95.00%.