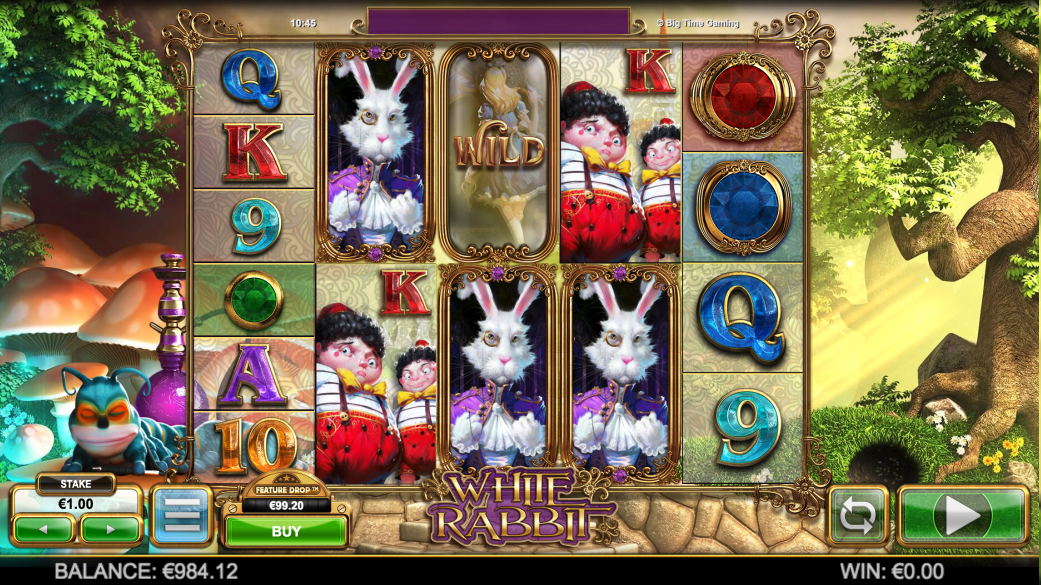 When Lewis Carroll wrote Alice’s Adventures in Wonderland he was probably unaware that one day his creation would be the theme for several online slot machines of which White Rabbit is one; it’s developed by Big Time Gaming and it’s full of extra features.

The symbols are all related to the theme and include the Queen of Hearts, red/blue/green ornaments, the Cheshire Cat, Tweedledum & Tweedledee, the Gryphon, the Mad Hatter, the teapot and the stack of tea cups. If the symbols appear smaller then two positions high the lower values will appear as 9, 10, J, Q, K and A.

Alice is wild, she only appears on reels two, three, four and five and she will substitute for all others to form winning combos except for the White Rabbit scatter, the Cupcake and any Feature Drop symbols.

This can be triggered by landing three of the White Rabbit scatter symbols anywhere on reels two, three and four or by ‘buying’ the feature using the button below the reels. It will cost 100x your line stake but this can be reduced by the small values which appear on the Feature Drop symbols on the reels; if it’s reduced to zero the feature triggers anyway.

You’ll receive fifteen free spins either way on a set of reels which start with between five and seven rows on each; a cupcake landing during this round will split into two random symbols, increasing the number of rows in that reel in the process up to a maximum of twelve. More spins are awarded if one reel reaches twelve symbols and that reel will also become the Queen’s Reel, with more red queens and wild symbols.

This can occur randomly in the base game and you will see up to four extra wilds added to the reels, each with a 2x or 3x extra multiplier for any wins.

White Rabbit is an intricately designed slot with some lovely graphics and a loyal nod to the events and characters of the original novel; the bonus features are creative (and lucrative for the luckier players) and there’s an RTP ranging from 97.39%-97.72%.