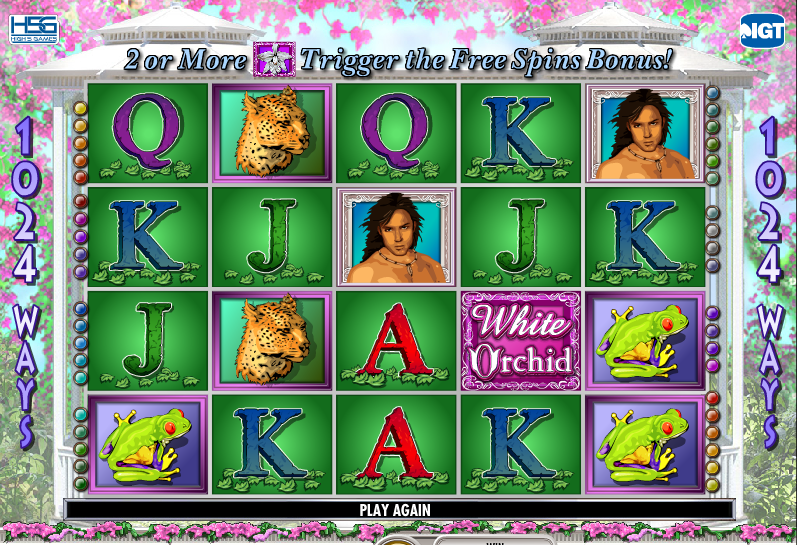 While some online slots assail your senses with action, colour and dramatic sound effects, others such as IGT’s White Orchid create a much more relaxing atmosphere and there are times when that’s what’s needed – perhaps after a heavy night on the alcohol or just when you require a bit of peace and quiet.

White Orchid has five reels features IGT’s 1024 ways to win payline structure which means that as long as you land matching symbols in adjacent reels, you have a winner. However those 1024 ways to win are only active when you’re playing with the maximum 80 coins; any less and it reverts to 40 paylines or less. This game also has four rows.

The game is set in some sort of utopia where nature makes everything look pretty, animals roam freely and the attractive natives line up in harmony with everything else. Aside from the standard J, Q, K and A symbols, there’s a frog, a butterfly, a leopard and our two characters.

Bonus symbols include a White Orchid logo wild which only appears on reels two to five and an actual orchid which appears on column three and activates the free spins.

Slightly unusually, these free spins are not triggered by a scatter symbol; what you need to do is land two, three or four of the orchid bonus symbols on reel three only. Landing four is possible because of the four row structure of this slot.

Two, three or four orchids will win you 10, 15 or 20 free spins and it’s possible to win up to 150 spins in total by landing more bonus symbols on reel three during the feature.

It’s more fun to play with the Multiway feature enabled but of course the theoretical return to the player remains the same however many lines you play. Don’t be tempted to play with 80 coins if that amount does;t suit your bankroll.

White Orchid has just the one bonus feature but it looks really nice and the reels spin in avery entertaining way; it’s also one of the few slots in which you can keep the sound on and not go loopy.