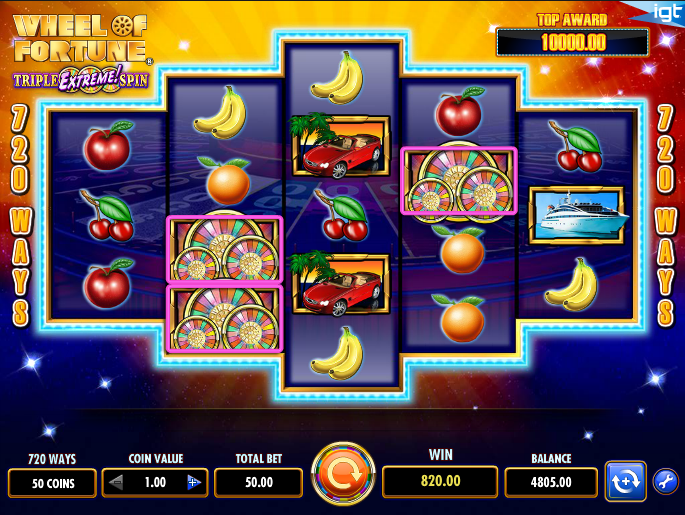 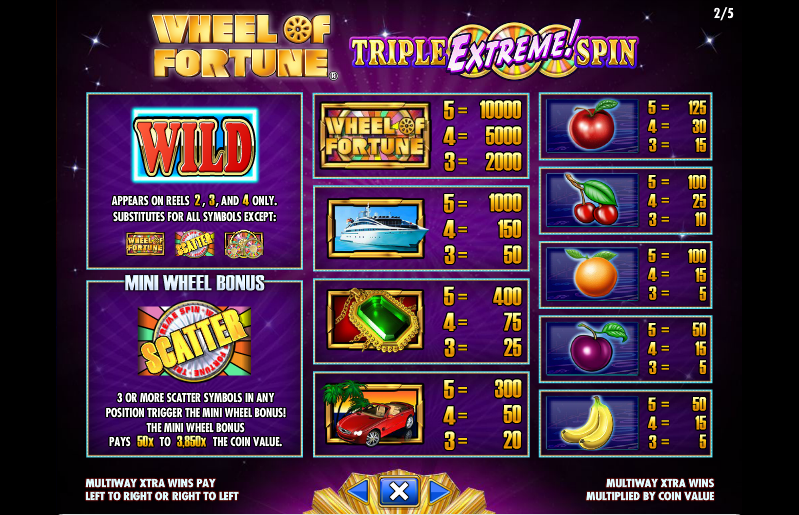 Wheel Of Fortune: Triple Extreme Spin is a five reel slot with variable rows (as you can see from the screenshot above) and 720 ways to win; there’s no standard payline structure and wins can be formed as long as there are matching symbols in adjacent reel starting from the left hand side.

The high value symbols represent luxury – a yacht, a gold necklace, a posh car and the Wheel Of Fortune logo –  while the lower values are fruit – bananas, cherries, oranges, plums and apples.

The wild symbol is a big red ‘Wild and there are two scatter symbols – the big ‘Scatter’ and the Triple Wheels – which activate separate features.

This is triggered by landing three or more of the Triple Wheel scatter symbols anywhere in view and you will first be taken to a screen displaying a number of envelopes. You get to pick the same number as the amount of triggering symbols so it will be at least three.

Each envelope reveals a pointer of either red, yellow or blue which corresponds to to the three wheels in the next stage. Each pointer awards one pick on that particular wheel.

Now the Triple Wheels will spin and you will win the prizes which correspond to your pointer positions, these could be coin prizes or multipliers. When the spin is finished the prize is totalled and you are whisked back to the base game.

This mini-game is triggered by landing three or more of the Scatter symbols anywhere in view; each of those wheels will now spin to reveal coin prizes.

We’ve enjoyed playing Wheel Of Fortune, it took no time at all to trigger both features and we grabbed some big wins in the process. It’s glossy, colourful and the RTP varies from 92.00% to 96.08%.