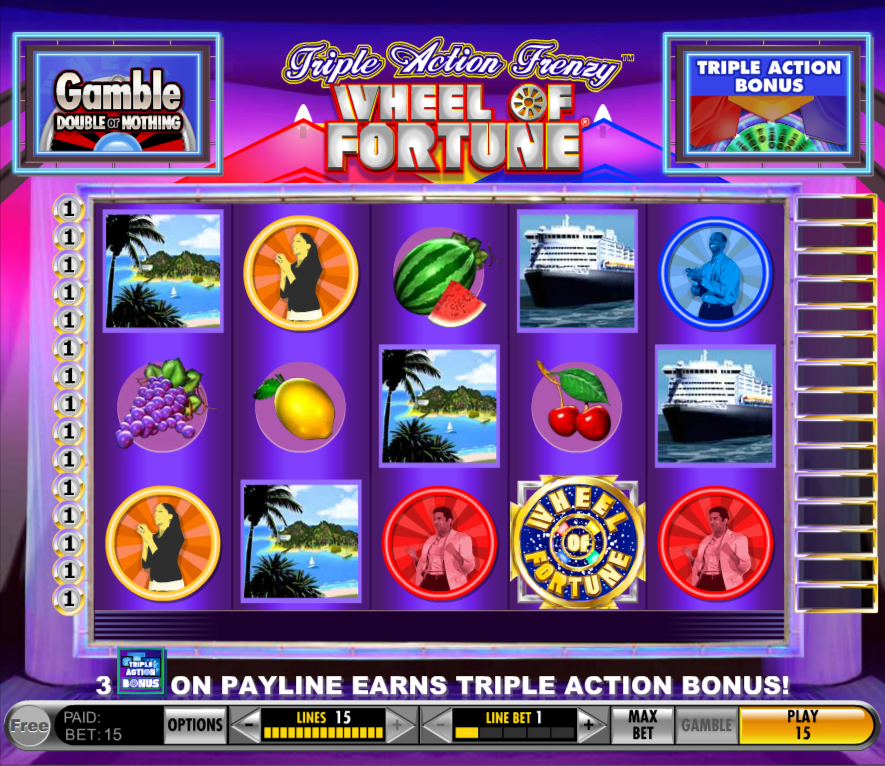 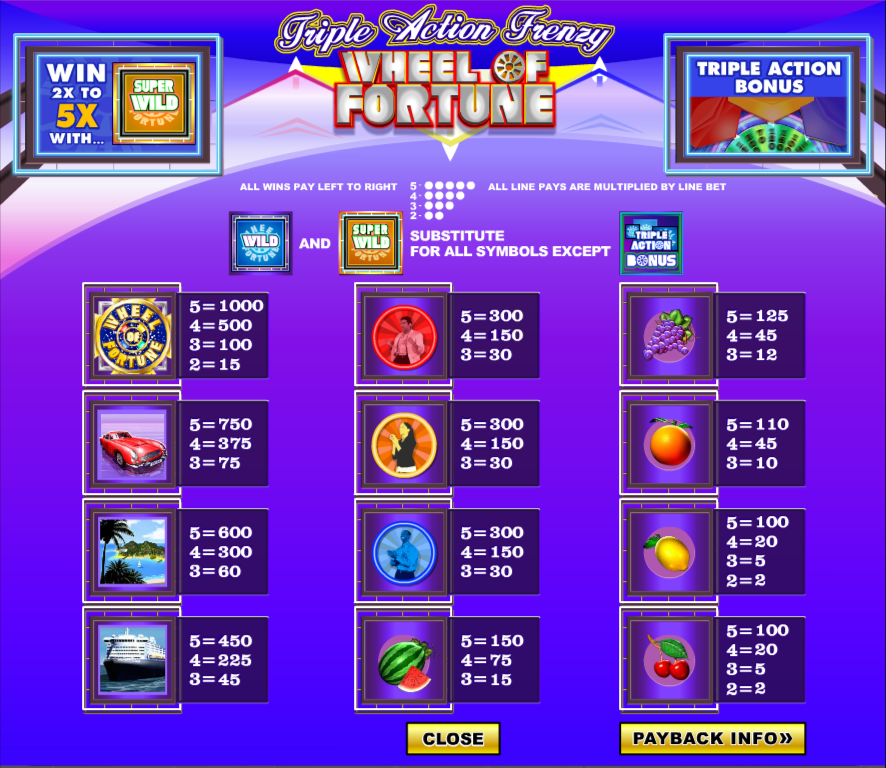 Wheel Of Fortune is an online slot from IGT based on a television game show which barely needs any introduction; it combined a version of ‘hangman’ with a huge prize wheel which contestants would spin to win money. We’ve reviewed a number of similar slots but this seems to be the only official conversion.

Wheel Of Fortune is subtitled ‘Triple Action Frenzy’ and it plays out over five reels, three rows and up to fifteen paylines. The design of the game takes it’s cue from the  television show with plenty of purple studio lighting and a cheesy gameshow soundtrack.

There are seven high value symbols including three different contestants, a cruise ship, a tropical island, a luxury car and the Wheel Of Fortune logo. Traditional fruity symbols such as cherries, lemons, oranges, grapes and watermelons make up the lower values.

There’s a blue wild symbol and an orangey Super Wild as well as ‘Triple Action Bonus’ icon which activates the main feature.

This symbols appears only on reel three but when it does it unfolds into a selection of five golden envelopes. All you have to do is pick one to reveal a multiplier of 2x, 3x or 5x which will apply to any wins including the Super Wild.

This game is triggered by landing three of the Triple Action Bonus symbols on an active payline on reels one, two and three. You now get to play both parts of the original game and the first is to try the ‘hangman’ part.

There are three partially completed words and you must select from the tiles underneath to try and find letters which will fit in one or more of those words. Each letter which fits will increase the multiplier for that word.

When you find a pointer it’s time to go to the Wheel Of Fortune; that pointer may contain one, two or three colours (which correspond to the three words and their multipliers). Now spin the wheel and wherever the pointer lands is the amount you win; more colours on that pointer mean bigger wins and more multipliers.

Each win can be gambled by clicking the ‘Gamble’ button below the reels. Just play a mini-Wheel Of Fortune game by picking red or black and spinning that wheel. Five correct guesses is the limit.

Although the gamble feature is a a straight 50/50 punt, we would still advise steering clear if you want to make your bankroll last little longer.

This is an entertaining slot with a well thought out bonus feature which we’ve enjoyed playing. It also has a pleasingly high RTP of 97.00% so give it a go.