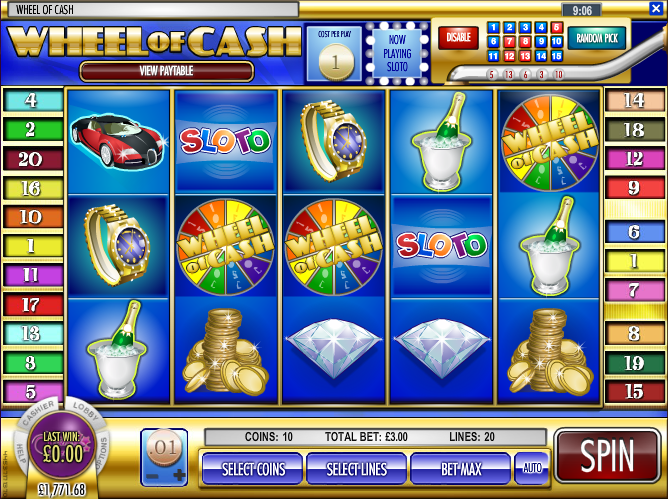 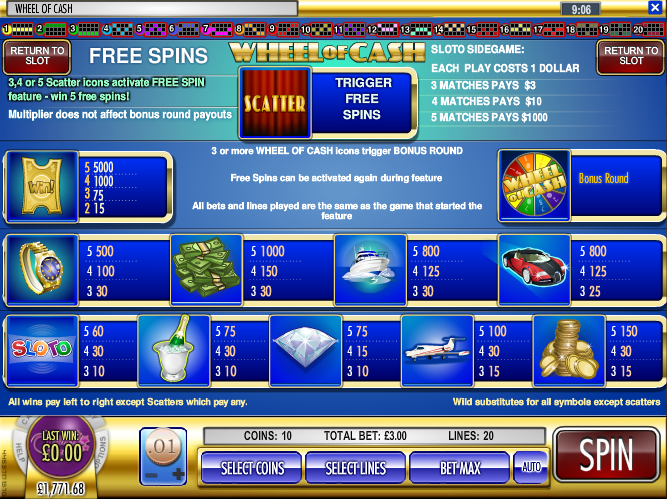 Wheel Of Cash is an online slot machine from Rival Gaming which harks back to those cheesy television gameshows from the 1980s and 1990s. The action is accompanied by an organ-playing musician and it’s that sound which will be familiar to fans of shows such as The Price Is Right and Wheel Of Fortune.

Wheel Of Cash is a five reel slot with three rows and up to twenty paylines; it’s a basic-looking game which lacks anything in the way of posh graphics or background scenery but it’s fast moving and bright enough to be entertaining nonetheless. There’s also a separate lottery-style game for a bit of extra excitement.

The symbols are a range of luxury items including gold coins, a private jet, a diamond, champagne, the ‘Sloto’ logo, a posh car, a yacht, a pile of cash and a gold watch.

A golden lottery ticket represents the wild symbol and there are two scatters – the Wheel Of Cash and the organist’s curtain – which activate separate bonus games.

If you’d like to play this extra feature just click the ‘Enable’ button in the top right hand corner. It costs an extra £1 to play and you must pick five numbers from those available (or use the ‘Random Pick’ option.

Five balls will be draw and more than three matches will win the following:

Landing three or more of the organist’s curtain scatter symbols will win you five free spins with all wins subject to a 5x multiplier.

More spins can be won by landing three+ more scatters during this feature and the Sloto game also continues.

Wheel Of Cash Bonus Round

This feature is triggered by landing three or more of the Wheel Of Cash scatter symbols anywhere in view. You now get to play a Wheel Of Fortune-style game on the next screen.

It’s pretty simple, just spin the wheel the first time for a guaranteed coin win. Now two segments will be replaced by black ‘Bust’ zones; if you choose to spin again and land on those you will lose all your winnings. Spin and win again and two more ‘Bust’ zones appear. Carry on until you feel your luck will run out.

The Wheel Of Cash bonus game gets hard pretty quickly because of the appearance of the ‘Bust’ zones; we recommend spinning twice and then collecting to ensure you keep those winnings.

There’s not much wrong with this slot aside from some slightly basic graphics. We like the addition of the Sloto game and the reasonable RTP of 96.29%.