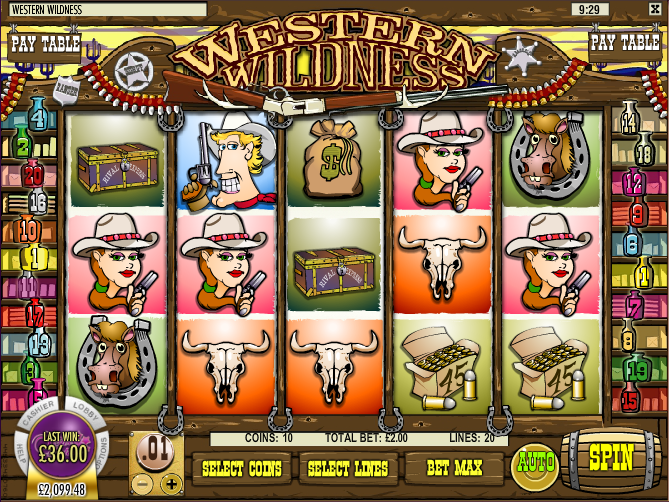 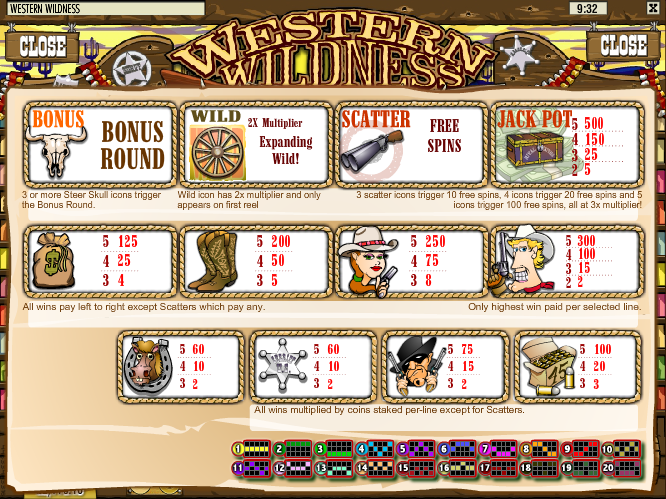 A trip to the Old West is always a treat for online slots fans and here it’s the turn of Rival Gaming to take us all the way back to a time when even your horse carried a gun and proper hygiene was a distant dream. This game is called Western Wildness, it features two distinct bonus rounds so read on to find out more.

Western Wildness is a five reel slot with three rows and twenty paylines; the soundtrack is reminiscent of tumbleweed rolling across the sandy plains. The reels are set against the shelves of some sort of general store with a late afternoon sky in the background.

There’s an amusing array of cowboy-themed symbols on show including a box of bullets, a masked gunman, a sheriff’s star, a horse, a cowboy, a cowgirl, cowboy boots, a sack of loot and a box of cash. The latter is the most valuable and pays 500x your line stake for five on an active payline.

The wagon wheel is wild and only appears on reel one in the base game; it will expand to fill the entire reel if it can form a winning line. There are two scatter symbols – a cow’s skull and a shotgun – which both activate separate features.

Landing three or more of the shotgun scatter symbols anywhere on the reels will reward you with the following:

Every win you land will be subject to a 3x multiplier and it’s possible to re-trigger the spins by landing more scatter symbols.

Three or more skull symbols anywhere in view will trigger this mini-game and, after reading the instructions page, you will be asked to take part in a competition to shoot bottles.

You start with six bullets initially and each bottle will win you one of the following:

When you’ve run out of bullets the round is over.

This is an entertaining enough game and it’s good to see that the features are triggered pretty easily. The bonus game in particular seems quite lucrative although the RTP is a little low at 94.44%.