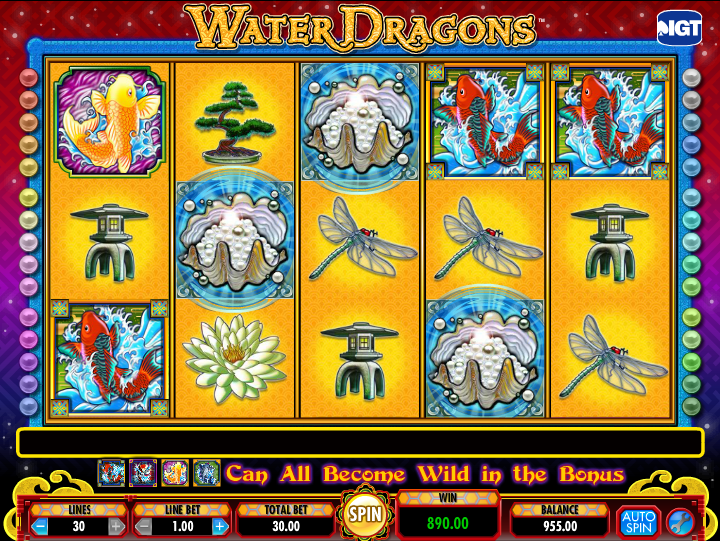 IGT are a company who can be relied upon to create enjoyable online slots and that’s the case with Water Dragons; it’s an oriental-themed game which joins a select club of similar slots in trying to bring some Chinese’Japanese culture to the reels and it doesn’t do a bad job.

Water Dragons is a five reel and thirty payline slot which is colourful if nothing else; the background fades vertically from red to purple and there’s a relaxing eastern soundtrack which makes you think you could be in a Chinese restaurant.

In reality, Water Dragons are a type of green Asian lizard but in this slot they are brightly-coloured fish – there are two red ones, a yellow one and a blue one. Also we have red and white lilies, a dragonfly, a bonsai tree and a spirit house.

The Water Dragon symbol is wild and the pearl symbol is the key to activating the free spins.

While this may look like a generic free spins round it comes with an added extra which contributes a little je ne sais quoi to the proceedings.  First of all though you need to land three of the pearl scatter symbols anywhere on reels two, three and four and this will reward you with 15 spins.

As the reels spin you will notice that reel five contains a pearl – land it and it will fill up one of the spaces next to the symbols underneath the reels.  When one symbol’s spaces are full it will then become wild on each subsequent spin.  This means that the frequency and amount of prizes increase as the round progresses.

More free spins can be triggered while playing this round up to a limit of 225.

This is a real pot luck sort of game so we can’t offer much in the way of tips here; the big money is made during the free spins so you don’t have to play with maximum paylines if you don’t want to – the scatter symbols will be active anyway. The higher the bet though, the higher the rewards.

This is a fairly run-of-the-mill slot enlivened by a the added extra during the bonus feature but also by the authentic background music.  Keep the sound on until you feel tempted to reach for the Chinese takeaway menu.