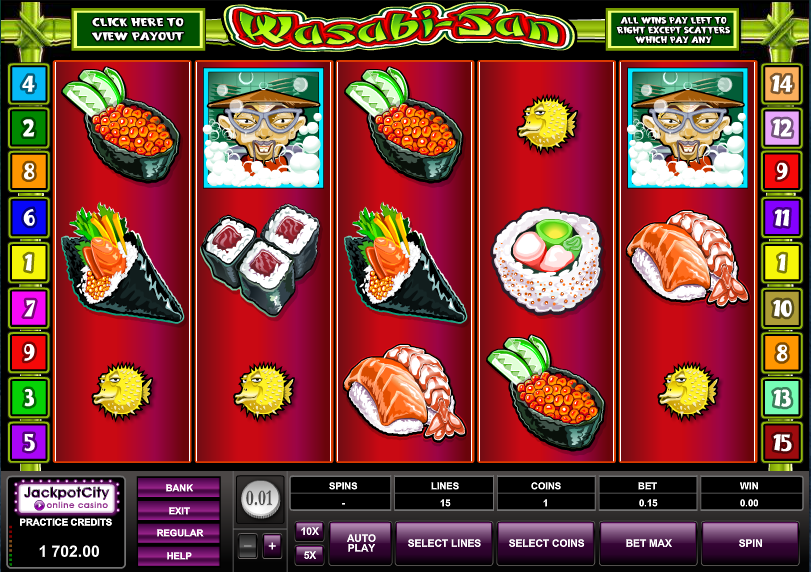 It’s been a very long time since we’ve played a online slot based on sushi; in fact on second thoughts we don’t think we’ve ever played one before so this is something new.  This is a Microgaming release named after the very hot sauce customers accidentally add to their dishes at Yo! Sushi.

Wasabi-San is a five reel slot with a possible fifteen paylines and the reels are attached to a bamboo frame.  The symbols are all really nicely-drawn and each one is related to a Japanese restaurant in some way.  We’re not going to pretend to know what each little dish of raw fish is called but it mostly involves rice, fish, vegetables and seaweed. There are also two male and female characters and a shimmering bonsai tree.

There’s a green Japanese chef which is wild along with a yellow puffer fish and a Wasabi logo which both activate bonus features.

There are some good old free spins here and three, four or five of the Wasabi scatter symbols anywhere on the reels will trigger that particular bonus.  The good news is that each win you land will be tripled during this feature and you can also re-trigger the bonus by landing more scatters in this round.

This feature is triggered by the deadly puffer fish and you’ll need to land three or more of these yellow creatures on an active payline; when you do they will swell up to fill each position in an amusing way and you’ll then be taken to the fish market.

Here you must check out the smiling (and somehow familiar) face of the stall holder before selecting three fish from his wares; each one will be worth a coin value.

If you’d like to trigger the Fish Market bonus then you’ll want to play with as many paylines as you can afford because those triggering symbols only land on those which are active.

This is an entertaining and well-designed slot with some great graphics, animations and sound effects.  In particular check out the knife wielding chef wild symbol when he contributes to a winning combination.